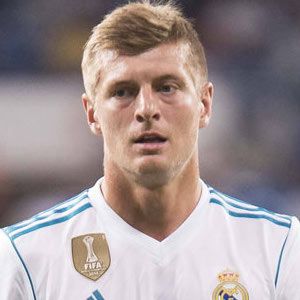 You have an advantage in life when you start where others talk first.

I am unable to rule anything out.

Cristiano Ronaldo loves scoring goals. Only HE can achieve what he's achieving.

Toni Kroos is a married man. On 13 June 2015, he tied the knot with Jessica Farber. He has a son named as Leon Kroos and daughter named as Amelie Kroos. He is living a happy married life with his wife and children.

Talking about the previous relationship, there is no information about his past affairs.

Who is Toni Kroos?

Toni Kroos is a professional German football player. He plays for Real Madrid as a midfielder. Earlier, he had played for German Champions Bayern Munich. He won both the FIFA World Cup and Champions League.

He was born on 4th January 1990, in Greifswald, East Germany, the son of Roland (father) and Birgit Kammer (mother). His mother was a German badminton player and his father works as a youth coach for Hansa Rostock.

His hard work and success became evident when he became a member of Bayern Munich’s first team at the age of 17. His nationality is German he was not the most outstanding student and spent a lot of time practicing football in participating in school tournaments.

There isn’t information regarding his education and academic achievements.

Toni’s current profession is a footballer. He is known for his passing skills on the field. He has one of the best striking right foot in the world. He started playing at Bayern Munich youth team in 2006, that time he was 17 years old. He was promoted to the Bayer Leverkusen team in 2007. He won Bundesliga title back to back.

He played 33 matches, he was also part of the team that was selected in the UEFA Champions League in 2008. He first placed for local club Greifswald SC, later transferred to the youth team of Hansa Rostock. He moved to Bayern Munich. He appeared as a late substitute in 2009.

Toni Kroos was the part of 2014, FIFA World Cup from the German national team and the team won the World Cup.

Toni Kroos was part of the Germany youth team when he was just 17. In the 2006 UEFA European Under-17 Championship, he was regarded as the best player and also won the 2007 FIFA U-17 World Cup Golden Ball.

He was named for the  2014 FIFA World Cup All-Star Team and Dream Team after he was assisted leader of the tournament.

He was also elected in the UEFA Team of the Year three times and the FIFPro World XI in 2014.

He has been praised by journalists and former professionals as a player with all the qualities for the role of an attacking midfielder and been widely considered one of the best midfielders in the world.

Gareth Bale is playing for his country Germany. The Euro cup matches will take place in different countries which are listed below:

Toni Kroos: Salary and Net Worth

Toni kroos has spoken about wanting to play for Kloop and leave Real Madrid transferred of the football player started to dwindle towards the more humorous.

Talking about his body measurement, Kroos has a height of 6 feet. Additionally, his hair color is light brown and eye color is blue. Furthermore, the weights are about 173 lbs (78 kg).