Toni Mahfud is a model, creative director, and artist. Toni has a very attractive look and body, hence he gained the fan following pretty soon. He is dating Ruhama. 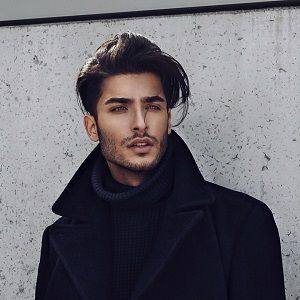 2020!!! I’m not the biggest fan of New Years resolutions cuz we all know how this is going to be, same goals every year. Goals are important yes, but I’d say I have hopes instead of resolutions and setting a different and stronger mindset.

2019 was full of ups and downs. It was a quite year for me on social media as you guys have noticed but a very loud one in my personal real life. I’ve learned a lot about myself and about my needs and things that make me happy and things that only suck out your energy and dims your lights.. doesn’t matter how much you fight for them. At the end of the day its true, you can’t change people or things and you shouldn’t let anyone or anything change you! You should get appreciated for what you truly are not only for what you can give.

I learned a lot from bad choices which In fact only made me stronger at this point.

You shouldn’t regret anything only your fear of not standing up for yourself. Also thankful about everyone that stepped into my world this year and stayed or just disappeared just as quickly.

Im thankful for the people that have been by my side since day one, you know who you are!! Without you, I wouldn’t be writing this! Thanks for getting along with me, I know I’m not easy lol. I love you!!! To all of my supporters out there!! I love every single one of you! Truly for standing by my side! Every client i worked with! Thank you for trusting in me and my work!

I’ll be stronger and full of ideas for this upcoming decade, that for sure I’ll promise! And yes, lots of art and exciting projects!

Can’t wait to start fully reflected and in peace. Happy new year everyone.

Toni and Ruhama were seen in the GQ Men of the Year award at Komische Oper. Berlin in 2017.

Who is Toni Mahfud?

Toni Mahfud is a German artist, model, and photographer who is popular for posting contents online along with some of his photos in the social media ‘Instagram’.

He has over 3.3 followers on Instagram and 1 million followers on Facebook. His contents include inspirational quotes and gratitude.

Toni Mahfud was born to Syrian parents in Hamburg, Germany, on December 2, 1994.

He was raised by his parents along with his brother, Jan Mahfud in the same place where he was born. He is of German nationality and is of Syrian ethnicity.

Toni was interested in arts right from the age of 4 years. He has not taken formal training in arts. But he started doing Anime character before switching to realistic arts.

Toni Mahfud has started posting his art online in 2011 and by April 2017 he had over 1.7 million likes on his Facebook. He also has a YouTube channel which he uses less often. His videos on the channel are related to his speed painting and speed drawings of Tatum and Maleficent.

He started his career by posting some of his own photos on the photo-sharing social media network Instagram. He went to make more stardom of his talents which increased his Instagram followers 3.4 million followers.

He is also a photographer, artist, and model.

He loves traveling and captures the photos of nature, diverse culture in his camera.

He has a brand partnership with Tom Hilfiger, Gillette, and OnePiece. Moreover, he also appeared on the red carpet for the Tommy Hilfiger brand which was his great moment.

Toni Mahfud was rumored to have been shooting with Mariano in February 2017 in Barcelona which later came to be true. He has not landed in any major controversies to date.

Moving towards Toni Mahfud’s body measurements, he is 6 Feet and 1 Inch(1.85m) tall and weighs 80 kg.

He has black hair and his eyes are hazel. Besides this, there is no other information about his body measurements.