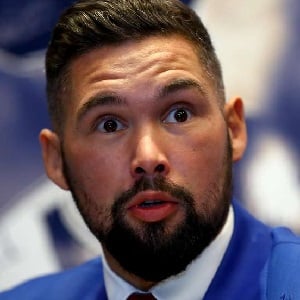 I love fighting. I don't know what it is in me, whether it's a sickness or a gene, but I just love standing in front of another fighter and going for it: they can hurt me, and I can hurt them

What is the relationship of Tony Bellew?

Tony Bellew is a married man. He is married to Rachael Roberts. Tony has known Roberts since he was nine years old.

They have three children together: Corey, Cobey, and Carter. Their marriage is going strong as there is no news regarding any extramarital affairs at present.

Who is Tony Bellew?

Tony Bellew is a British former professional boxer. From 2016 to 2017, he held the WBC cruiserweight title.

Additionally, from 2010 to 2014, he held the British and Commonwealth light-heavyweight titles.

Bellew was born in Liverpool on November 30, 1982. After living on Mulgrave Street, Toxteth, Liverpool for several years, he moved to Smithdown Road in Wavertree.

Tony became interested in the world of boxing in his childhood years. He is of British nationality. Furthermore, he belongs to a mixed ethnic background of English and African.

On 6 October 2007, Tony Bellew made his professional boxing debut against journeyman Jamie Ambler. In the year 2008, he defeated Ayitey Powers, Hastings Rasani, Paul Bonson, and Phil Goodwin among others.

He had a 40-7 amateur career. Additionally, he was challenged for the vacant Commonwealth title at light heavyweight on 12 March 2010.  He beat Atoli Moore and also defended the title against Bob Ajisafe at the Grosvenor House Hotel.

Bellew’s first heavyweight fight was against former WBA heavyweight champion David Haye. Currently, he holds a professional record of 24 wins, 15 by KO/TKO, 2 losses, and 1 draw. Furthermore, he also held the WBC Intercontinental belt in 2012. Furthermore, he is an avid Everton Football Club supporter. In addition, he also appeared as ‘Pretty’ Ricky Conlan in the 2015 movie ‘Creed’.

Bellew has not revealed his current salary. However, he has an estimated net worth of around $13 million as of 2022.

Bellew became part of a controversy after his wife Rachael went on a homophobic rant after Bellew’s defeat with Usyk. Additionally, he made the news recently due to his retirement news.

Talking about his body measurement, Tony Bellew has a height of 6 feet 2 inches (1.89 m). Additionally, he weighs around 97 kg. Furthermore, his hair color and eye color are dark browns.

Bellew is active on social media. He has a huge number of followers on social networking sites such as Facebook, Instagram, and Twitter. He has more than 700.9k followers.

In addition, he has over 754k followers on Instagram. Similarly, his Facebook page has more than 69k followers.

A face on Sky Sports News, Anna Woolhouse’s journey to establish herself as a broadcast journalist!! What does she love? All details on her relationship & love interest