Tony Bennett is a married man. His wife’s name is Laurel Bennett.

They first met at Chapel Hill where Laurel was working as the youth minister. At the time, Tony used to play for Charlotte Hornets. Soon after that, they started dating each other in 1995.

Then in 1996, they took their relationship to another level and got married. Together, the couple is blessed with the two children, a daughter Anna and a son, Eli. 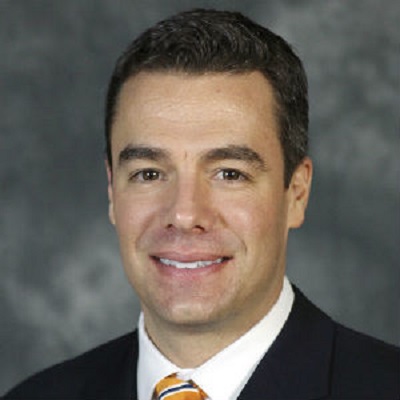 Who is Tony Bennett?

American Tony Bennett is a former basketball player and at present serves as a coach. He is the three-time Henry Iba Award-winning for coaching.

Bennett is renowned for his defensive style strategy.

He was born as Anthony Guy Bennett on the 1st of June 1969 in Clintonville, Wisconsin. His father, Dick Bennett is a former basketball coach and his mother’s name is Anne Bennett.

He is of British-French ethnicity. Tony has a sister, Kathi Bennett who is a basketball coach.

He joined Stevens Point Area Senior High in Wisconsin. Also, he attended Preble High School in Green Bay. He played for both of the High School.

Following that, he joined the University of Wisconsin–Green Bay. For the University’s basketball team, he played in NCAA Tournament. Also, he appeared in the National Invitation Tournament for the team.

Professionally, he started playing in 1992. In the year, Charlotte Hornets selected him to play in the 1992 NBA Draft. For the team, he played for three seasons till 1995 as a backup point guard.

In the season of 1996, he joined North Harbour Vikings. In the following year, he started coaching the team.

After his career as a player, he expanded his career as a coach for North Harbour Vikings. After the 1999 season, he became the manager of his father in the U.S. During the time, he learned more about the game. He continued the post till 2003.

After that, he was promoted as the associated head coach for the team. Two years later, he was again promoted to the position of head coach of Washington State. Under his guidance, Washington State earned 26 wins in both seasons of 2006-2007, 2007-2008.

On the 31st of March 2009, he joined Virginia Cavaliers as the head coach. At the same time, Ritchie McKay became his associate head. In his first six seasons, the team won 15, 16, 22, 23, 30 and 30 games. That winning score shows a vast improvement as compared to the team’s past performance.

In the season 2013-2014, Cavaliers advanced to the NCAA Tournament. For the season, he became the finalist for Naismith Coach of the year. Also, he ended up being the 1st runner up for AP Coach of the Year. In the same season, he extended the contract with the team 2021.

Moving Forward under his guidance, in 2019, the team won their very first NCAA national championship with 35 wins. In the season, he was awarded the ACC Coach of the year for the fourth time.

He has an estimated net worth of $11 million. According to the salary sheet of the University, his earnings as a basketball coach is $525k yearly.

In the season of 2018, the USA today has estimated that he had made $4.15 million. Also, he received the incentives of $1.175 million. Apart from that, he also received compensation of $5.2 million per season.

In 2019, his contract extension created a huge buzz in the media when he rejected the raise in his contract. Declining the offer, he said that he is blessed with more than he needs. He also added that if the raise can help the athletic department, its’ other programs and coaches.

At the same time, he donated $50ok for the career-training initiative for men’s basketball players consulting his wife.

Tony Bennett has black eyes with black hair. His height is 6 feet and weighs around 79kg.

Tony has 19.6k followers on Twitter with the handle, @IfTonyTweeted.

He is following the personalities like Sam Vecenie, Herman Moore, and Emily Caron.