Tony Finau is an American professional golfer. He plays for the PGA tour. Tony is married and has four children.

Tony Finau is married to Alayna Finau. There is no other information disclosed regarding his wedding ceremony, their marriage date, and their relation before their marriage.

As of now, he and his wife are living happily with their children in the city of Lehi in Utah. 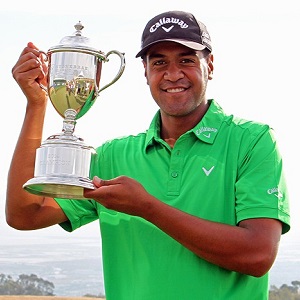 I think theres always still a Tiger effect because it is Tiger, but its a different era, and hes playing against a different generation

Who is Tony Finau?

His professional tour wins include 1 “PGA tour” win, and 1 “Web.com Tour” win. Additionally, he has participated in “U.S Open”, “The Open Championship”, and “PGA Championship”.

Presently, he ranks at 71 in Official World Golf Ranking. The best position he has reached in this ranking is 70. As of now, he is busy playing golf for PGA Tour.

Tony was born in Salt Lake City in the state of Utah on September 14, 1989. He possesses American nationality and ethnicity is mixed (Tongan and American Samoan).

He was born to parents, Kelepi Finau(father) and Ravena Finau(mother), and has a brother, Gipper. His father was an immigrant from Tonga and has worked very hard to make Toy and his brother successful. Tony’s mother was also a very strong lady who raised seven homeless children.

Tony was passionate about golf from a very young age. He played golf throughout his high school and college days. Although college offered him a basketball scholarship, he focused on golf.

There isn’t information regarding his early life and childhood days.

As per his education, he didn’t go to college. At the age of 17, he became a full-time professional golfer.

Tony initiated his golf career from a young age. He grew his passion for golf during his childhood and high school days. As an amateur golfer, he won the “Utah State Amateur Championship” in 2006.

This win boosted his career. Afterward, he thought of turning professional in 2007 and didn’t go to college. In 2007, he turned professional. He started touring with mini-tours like “Gateway Tour”, “NGA Hooters Tour”, and “National Pro Tour”.

Tony Finau’s first major professional win is the “Stonebrae Classic” in Web.com Tour in 2014. Afterward, in 2016, he won the title of “Puerto Rico Open” in the PGA tour. He worked hard on every other tour. Consequently, he has accumulated 2 professional wins till now including one “PGA Tour” win, and one “Web.com Tour” win. His current FedEx cup rank is 8.

Moreover, he has a foundation The Tony Finau Foundation which was opened to collect the charity funds to build an interactive learning facility, offer scholarships, and establish a state-of-the-art golf academy.

Seeing his performance in the various match, we can assume that he receives handsome earnings. His net worth is estimated at around $10 million as of 2022 but the salary is under review.

As of now, there are no rumors that surround his personal or professional life.

Tony Finau has a height of 6 feet 4 inches. His body weighs 91kg. He has black hair and dark brown eyes.