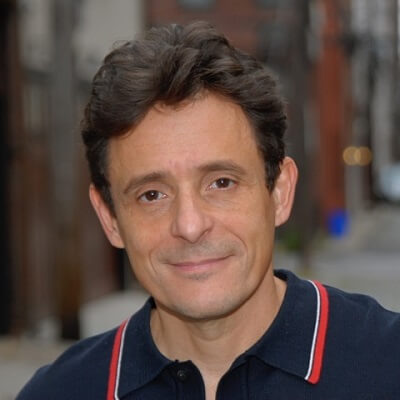 Tony Gillan is a married man. He is married to Lisa Roberts Gillan. She is an actress well-known for her works in ‘I Love Trouble’, ‘Runaway Bride’, ‘Maid in Manhattan’, etc.

The couple exchanged wedding vows in 1997. Both of them are absent from social media and are private regarding their personal life. So, not much is known about their married life.

Who is Tony Gillan?

Tony Gillan is an American actor. He is best known for his work in Path to Paradise: The Untold Story of the World Trade Center Bombing, Law & Order, and Ten Benny.

He spent his childhood days in Queens. His ethnicity is Caucasian.

Talking about his education, Tony attended Queens College in New York. Also, he went to the California Institute of the Arts where he studied privately with William Esper.

Tony Gillan has appeared in movies, TV shows, and also on Broadway. His Broadway credits include ‘Taking Sides’ by Ronald Harwood and ‘Conversations with my Father’ by Herb Gardner. Throughout the years, he has worked for notable directors including Doug Hughes, Nicholas Martin, Daniel Sullivan, and David Jones. He also has Off-Broadway credits to his name. He appeared in the Second Stage, Judith Anderson, Lion Theatre. His regional works include Yale Rep, Seattle Rep, Ahmanson/Doolittle, Bay Street Theatre, Crossroads Theatre, etc.

In 1995, he appeared as Butchie in the movie, ‘Ten Benny’. The following year, he made an appearance as Gristedes Customer in ‘I’m Not Rappaport’. The next year, in 1997, he portrayed Mohammed Salameh in ‘Path to Paradise: World Trade Center Bombing’. In 1999, he appeared in the TV show, Law & Order as Forensic Tech Trefil.

Since 2011, he has been a part of the Barrow community and has trained there as an actor and teacher under Lee Brock and Seth Barrish. In 2016, he appeared as Principal Collins in the movie, ‘No Letting Go’.

His wife, Lisa, the sister of Julia Roberts, is known for her works in ‘I Love Trouble’, ‘Runaway Bride’, ‘Maid in Manhattan’, etc.

How much is Tony Gillan worth?

Tony Gillan has brown hair and similarly, a pair of brown eyes. There is no information about his height, weight, and other body measurements.

Tony has not been involved in any controversies. He has been able to keep himself away from any type of controversy and scandal. So far, he has not done anything controversial in his acting career. Similarly, there are no rumors about him of any kind.

Gillan is very private regarding his personal life and has chosen to stay away from social media. He is not active on Facebook, Instagram, and Twitter.