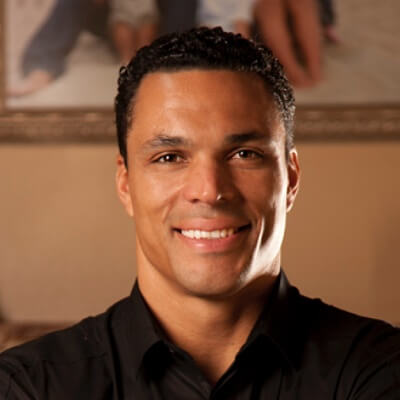 Tony Gonzalez is a married man. He is currently married to October Gonzalez. She is an actress well-known for ‘Modern Family’, ‘Play It Forward’, and ‘Rumble: The Indians Who Rocked The World’.

Their marriage has been going strong for 13 years since they exchanged wedding vows in July of 2007. They had been dating from way back, since 2003 and have 3 children, 2 daughters, River, and Malia, and a son, Niko. The couple met when October was working at a bar and after a while, they started dating.

Tony has had at least 3 exes before meeting October but they didn’t last for more than a year. His exes include Lauren Sanchez and Shannon Malone.

Who is Tony Gonzalez?

Tony Gonzalez is a former professional American football player who is now working as a football analyst on fox sports. He played as a tight end and has played for Kansas City Chiefs and Atlanta Falcons.

He holds the NFL record for total receiving yards by a tight end and became a pro football hall of fame inductee in 2019.

Tony Gonzalez was born on February 27, 1976, in Torrance, California.  As of 2020, his age is 44. He was raised solely by his mother, Judy, who worked two jobs at the time to support the family. He has a mixed heritage due to his parents where his father was of Jamaican and Scottish descent while his mother’s family is of African American, euro-American, Argentinian, and native American ancestry.

Talking about his education, he went to high school in Huntington Beach and for college, he went to the University of California. His college years were very important in shaping his career as it was at this time that he started to pursue football more professionally.

His career in sports started as early as his senior year in high school where he performed brilliantly in both basketball and football. He even shared the Orange County High School Athlete of the year along with golfer Tiger Woods. His college life furthered his career as he played football and basketball for the University of California. He performed very good at both but eventually chose football as his career rather than basketball.

Gonzalez was ranked as one of the top tight ends in the 1997 NFL Draft. He began his NFL career in the 1997 season. Tony had a good season finishing with 33 receptions, two touchdowns, and a blocked punt on several teams and was also named to the NFL All-Rookie team for the season. He improved dramatically in the later seasons, being named as a First Team All-Pro as well as earning Pro-Bowl selections for 3consecutive seasons in 1999, 2000, and 2001. From 2003-2006 he was the most productive tight end in the NFL. His best season came in 2004 where he made an NFL record (for a tight end) with 102 caught passes for 1258 yards and 7 touchdowns.

Later in 2008, he became an NFL all-time leader in receiving yards for a tight end, which it still is to this day. Then in April of 2009, he was traded to the Atlanta Falcons and although he had a good season it wasn’t as good as his previous seasons and for the 1st time in 10 years, he was not selected for the Pro-Bowl. He played through the 2011 and 2012 seasons but by the end of 2012, he contemplated retiring. He did come back for a final season in 2013 but that season would be his last as he officially retired from the game on December 30, 2013.

Gonzalez is considered as an all-time great in American football and is widely regarded by many as the best Tight End to have ever played the game.

Tony Gonzalez has an estimated net worth of around $20 million. He earned around $6 million a year on average due to his contract with the Atlanta Falcons in his last two years. But his current salary as an analyst on Fox sports is unknown.

As of now, Tony has not been involved with any negative rumors or controversies. He is a well-loved athlete even loved by fans of other teams, mostly due to his diligent and humble nature even when he became one of the biggest stars in the NFL.

Tony Gonzalez has a height of 6 feet 5 inches and a weight of 113 kg. His eye color is brown and his hair is black.

You may also like to read the Bio, Career, Net Worth, Body Measurements, and more about Matt Gilroy, Don Diamont, Simone Garcia Johnson, and more.