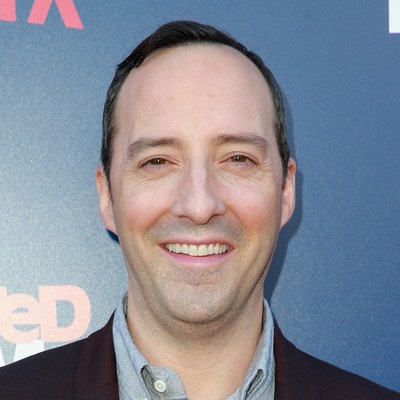 ''Arrested Developments... I think I am going to be getting a prosthetic hand, but who knows where the writers are going.''

''Its always a surprise! This business is always an adventure.'' ''I was kind of spastic kid.''

'' Veep has been one of the best rides of my life.'' “That moment where she sent him to jail, that was a gift to Gary because nothing was going to break this obsession. My Favorite Episode. Her sending him to jail was the only thing that would break it.”

Tony is married to his wife Martel Thompson Hale on May 24, 2003. She is a make-up artist by profession and also an Emmy award winner for outstanding make-up for a drama series.

The duo is together for the last 16 years. He met his wife first at Bible study group in New York. They welcomed their first child, a girl, on 26 February 2006. The couple resides in Los Angles with their daughter, Joe.

Who is Tony Hale?

American actor and Comedian Tony Hale is best known for his role in Fox Comedy Series Arrested Development as Buster Bluth, a character of a sociopath. He played as Gary Walsh on the HBO comedy Veep, for which he won the 2013 and 2015 Primetime Emmy Award for Outstanding Supporting Actor in a comedy series.

Hale was born on September 30, 1970, to Rita and Mike Hale. His mother worked as a staff assistant to state representative Kathy Ashe and his father taught nuclear and atomic physics and severed in the military. He attended the Young Actors theater in Florida and graduated from Leon High School in 1988.

He graduated from Samford University in 1992 with a journalism degree and completed his masters in 1995 from the School of communication and arts, Virginia. Then he moved to New York for his acting career. In earlier years of his career, he did many Commercials including iconic ad of Volkswagen in which he enthusiastically lip-synced ”Mr. Roberto” by Styx on the front seat of a VW Golf.

Tony Hale started his career from Tv series, Ghost stories in 1997 as Billy Thrope. In addition to Arrested Development (2003-2006), he has appeared in a lot of popular tv shows like Dawson’s Creek, Sex in the City, The Sopranos, Good Vibes, Numbers, Veep and many more. In 2018, he played as Jerome Squalor on Netflix comedy series, A Series of Unfortunate Events.

Along with Tv shows, he has appeared in many films too like Stateside, unaccompanied Minors, Stranger than Fiction, Transformer: The Last Knight, My Suicide, Love Simon, To the Stars to name few. He voiced for animated movies; The Tale of Despereaux, The Angry Birds movie 2, Toy Story 4 and upcoming Dreamworks show, Archibald’s Next Big Thing. In 2017, he hosted the 9th annual shorty awards.

He has not only appeared in Tv shows and films but also has played in Music Videos. He has portrayed the roles in songs: ”Awakening” (by American rock band Switchfoot), ”Beat it”(by Ameican rock band Fall Out Boy) and ”Bartender” (by  American band Lady Antebellum).

With achievements in the entertainment world, he has earned good amount of money. Tony’s net worth is estimated to be around $9 million.

After graduating, he moved to New York and lived there for a decade. He studied acting at The Barrow Group, a New York City theater company. He is also the founding member of  The Haven, community of Christain that meets weekly.

You also can read about Paul Rodriguez, Chelsea Peretti, Will Forte.