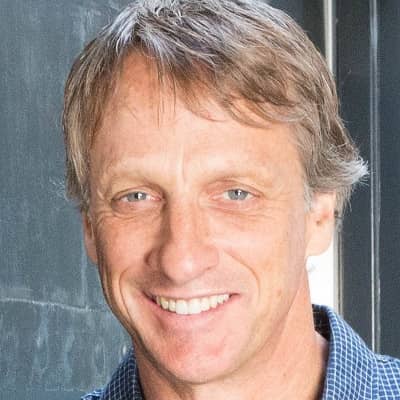 I love snowboarding, but I would never want to do it competitively or at a professional level. Snowboarding is a spawn of skating, and skating is my passion.

I won't quit skating until I am physically unable.

I consider skateboarding an art form, a lifestyle, and a sport. 'Action sport' would be the least offensive categorization.

Technology has allowed me to reach my fans directly. Social media: it has been a complete revolution of how to interact, promote and share things.

Don't be afraid of girls. That is my big regret. Knowing what I know about girls, I should have just gone for it. Guys are such wimps.

Before, Hawk has been married thrice.

He was first married to Cindy Dunbar in April 1990. They started dating from high school. The couple also has a son, Riley Hawk born on December 6, 1992.  Riley is also a professional skateboarder Hawk and Dunbar divorced in 1993.

After that, he was married to Lhotse Merriam in 2006. Their wedding ceremony was held in Fiji. Rancid also played for them as the wedding band. The couple welcomed their daughter Kadence Clover Hawk in 2008. They separated in 2011.

Who is Tony Hawk?

Tony Hawk is an American professional skateboarder, 3, and the owner of the skateboard company Birdhouse.

He has two older sisters, Pat Hawk and Lenore Hawk, and likely has an older brother, Steve Hawk.

Hawk was just 12 yrs old when he got his first sponsor, Dogtown skateboards. And he became a professional skateboarder. after two years. He was already considered one of the top skateboarders in America when he was 16.

In the year 1982 Hawk became the part of legendary Bones Brigade team. The team then consists of Steve Caballero, Mike McGill, Lance Mountain, and others. Hawk has made several movie and television appearances since the beginning of his career. He first appears as a skater double in the 1986 movie  Thrashin.

Hawk started his own skateboarding company called ‘BirdHouse,’ In the first days the company didn’t have success but it gained popularity in 1995 that skateboarding came into the limelight. Hawk was the first skater to perform a “900” on a skateboard on July 27, 1999.

The same year he launched a video game series based on his skateboarding, titled ‘Tony Hawk’s Pro Skater. It has already launched 18 titles so far. In 2002 he started an extreme sports tour called Boom Boom HuckJam.

Hawk is also into philanthropy and there are many parks created by him under the Tony Hawk Foundation. He also provided grants for creating several public skateboard parks in low-income areas. Moreover in 2008, the rides were billed as the ‘total Tony Hawk experience’.
New ride ‘Superman: Ultimate Fight’ started in 2012 at Six Flags Mexico.

Hawk launched his YouTube channel in January 2012. The channel was titled ‘Ride’, and afterward, he partnered with others skaters in this industry for it. It has now amassed over 1.72M subscribers.

The skateboarder has also worked for various movies and skating videos. He has starred in ‘Police Academy 4’, ‘Haggard’, ‘Waiting for Lighting’, ‘The Other F Word’ ‘Comedy Bang! Bang!’, and many others.

Being the richest skateboarder in the world he holds a net worth of around $140 million.

He has collected that fortune from his 39-year career through his various projects. He owns a grand house in San Diego. He has various car collections, including his Tesla Model S, with a value of around $75 thousand.

Moreover, he has his own skateboard company, Birdhouse which massively contributed to his prosperity. Along with it, Hawk also earns from the sales of his video game series.

Hawk hasn’t been part of any such rumors or controversial news in the media.

Tony stands with a height of 6 feet and 3 inches and weighs 78 kg. He has grey-colored hair with beautiful blue eyes.

You may also read the bio of Jagger Eaton, Sky Brown, Ben Azelart, and Sabre Norris.