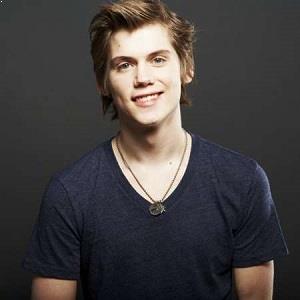 I had my share of issues, but now, it's something that's made me who I am and no complaints

Being from Texas, acting or music isn't really a thing to do

I'm gonna do a country solo album at one point just 'cause. I'm a big fan of Keith Urban, Trace Adkins, Rascal Flatts, even though that's more pop. I grew up on country.

Later, Tony was part of another short-term relationship. From October 2009 to May 2010, he was romantically involved with American Actress Emily Osment.

Who is Tony Oller?

Tony Oller is an American singer, songwriter, plus and actor. He portrayed the role of Walt Moore on the TV show ‘Gigantic’, and also appeared as Danny on ‘As the Bell Rings’.

He was born in Houston, Texas on February 25, 1991. He is the son of Mary Anne (mother) and Jeff Oller (father). Initially, Tony became interested in the world of acting in his early years.

In addition, he began acting and singing since his childhood at the age of 9. He belongs to a mixed ethnic background of German, English, Irish and Norwegian.

Finally, Tony attended Cy-Fair High School and graduated from there with honors in Debate in 2009.

Initially, Tony Oller appeared in both the seasons of the Disney Channel short series ‘As the Bell Rings’ as Danny.

Afterward, Tony had a supporting role in the Lifetime drama movie ‘Unanswered Prayers’. Additionally, he appeared in the Teen Nick series ‘Gigantic’ as Walt Moore. Next, he starred in NBC’s tv movie ‘Field of Vision’ in 2011. Tony also guest-starred in an episode of CSI: NY’ in 2011.

Some other movies and television series that Tony has appeared in are Field of Vision, Unanswered Prayers, I Flunked Sunday School, and The Thundermans.

Later on August 2, 2008, his first song/music video “Could You Be The One” was premiered on the Disney Channel. Furthermore,” Here I Go” and “All You Gotta Do” were also released. In addition, he also appeared on Savannah Outen’s music video for her single, “If You Only Knew”.

Tony and his former Gigantic co-star Malcolm David Kelley joined up to form the pop duo MKTO in 2012. Later, they signed to Columbia Records. They released their debut single “Thank You” on January 15, 2013. Eventually, the single reached number 2 on the Australian charts. Their single “Classic” was released with a music video in 2013.

MKTO released the lyric video for their new single, “Bad Girls” on June 2, 2015. Sadly, Tony announced on Twitter that the band has broken up on March 10, 2017. Tony garnered the Teen Choice Award nomination in 2014 in the category of Choice Music: Breakout Group.

This actor and singer’s estimated net worth is c His movie of 2018 The First Purge has collected around $137 million.

There was a rumor during January 2015 of Tony was dating American Actress Lucy Hale.

Furthermore, the splitting of Tony’s band MKTO became a controversial topic for the band’s long-time fans.

Moving towards his body measurements, Tony Oller has a height of 6 ft. He weighs 75 kg or 165 pounds. Additionally, his hair color is light brown and his eye color is blue.

Tony is quite active on social networking sites.