Tony Romo is one of the highest paid American football quarterback and analyst. He loves sports. Tony is happily married to Candice Crawford since 2011. Together, they have three kids.

Tony Romo is a married man. He is currently sharing the conjugal bond with Candice Crawford. They tied the knot on May 28, 2011. Crawford is the 2008 Miss Missouri USA and is a former journalist.

Previously, Tony was dating Jessica Simpson, an American actress in 2007. However, they broke up on June 9, 2009.

It seems like, Tony is happy with his marriage. 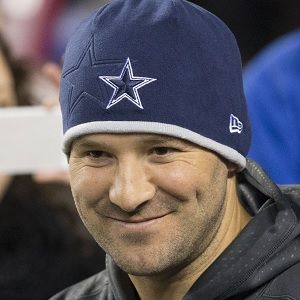 As a competitor and an athlete, you love that you get to go back and challenge someone, especially the world champs.

You're always playing the game to reach the ultimate goal.

Who is Tony Romo?

Tony Romo is a former American football quarterback. He is most popular as a former player of the Dallas Cowboys of the National Football League.

In 2017, Tony retired from professional football. And currently, he is a television analyst for the National Football league.

Antonio Ramiro Romo was born on April 21, 1981, in San Diego, California, the U.S. to Mexican-American ancestry. He is currently 41 years old. He is the son of Joan Romo, mother, and Ramiro Romo Jr., father.

His father Ramiro served in the United States Navy and his mother was a store clerk. He also has two sisters, Joscelyn Romo and Danielle Romo. He was raised in Wisconsin.

Talking about Tony’s childhood, he has not shared many of his childhood details and memories with us so far.

Tony Romo was into playing since he was a child. He played golf, baseball, basketball, tennis, and several other games when he was small. However, he was really involved in playing football when he was in high school. There he played as a quarterback.

By the year 2002, Tiny was already an inspiration to the new generation since he was equally rewarded for his hard work. However, he professionally started his career in 2003.

During his long career, he only played for Dallas Cowboys and has been able to receive such enormous fame. He remained in the background for some a year and he reminded his presence all over the U.S in 2004 when he played a vital role in the win against Oakland Raiders.

With impressive numbers, he was climbing to the summit of fame and wealth. And after playing for some season for the Cowboys he signed a six years contract of $67.5 million with them. And by the time he was playing the 2012 season, he became one of the best quarterbacks in the NFL.

Apart from his professional career, he has been actively participating in community work. He is mainly involved in promoting Animal Rights.

In addition, he also likes playing golf. He even participated in a championship but failed to get good results. And currently, he is a color analyst for CBS Sports.

There is a long list of awards and honors that Tony has received under his name.

During his contribution to the Eastern Illinois team, he was honored with All-America and All-Ohio Valley Conference. In addition, he received the Walter Peyton Award and the OVC Player of the Year award.

Furthermore, during his professional career in the NFL, he has received many awards. In 2011, he received Ed Block Courage Award. Also in 2009, he was inducted into the EIU Athletic Hall of Fame. In addition, he was listed on the list of top 100 players in 2015.

Tony Romo: Salary and Net Worth

Tony is one of the highest-paid sports announcers in American history.

He makes $18 million per annum working with CBS including his perks. Tony makes $1 million per game.

There is a rumor floating about Tony’s professional career. Many people are talking that Tony will return to the field despite his retirement. Even the veteran players cited on his comeback. However, Tony only can decide whether he will return or not. And as of now, he hasn’t talked about his return.

Furthermore, there was a false rumor in the past suggesting him to be gay.

Tony Romo is 6 feet 2 inches tall guy. Also, he weighs about 104 Kg. He has brown hair and black eyes. Furthermore, he has fair skin.