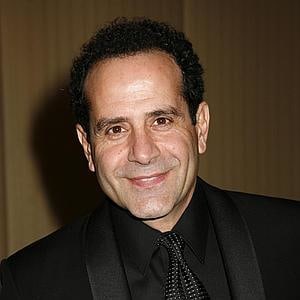 With what's happened in the world the last three years, it's easier to see why it's become popular again to diminish and revile Arabs and Muslims in American popular culture.

To my fellow nominees, whoever they are - I'm not that familiar with their work - I just want to say, there's always next year - except, you know, for Ray Romano.

I still think of myself as a stage actor. When I do film and television, I try to implement what I was taught to do in theatre, to try to stretch into characters that are far from myself.

You're not really necessarily the coolest guy in their life. You are a conduit to the really cool people.

What is the relationship of Tony Shalhoub?

Tony Shalhoub is a married man. He is married to actress Brooke Adams. The pair married in April 1992. The couple has worked together in several films.

They have two adopted children: Josie Lynn Shalhoub and Sophie Shalhoub. Their marriage is going strong as there is no news regarding any extramarital affairs at present.

Who is Tony Shalhoub?

Tony Shalhoub is an American actor. People mostly know him for his role as detective Adrian Monk in the USA TV series ‘Monk.’

Additionally, he has also appeared in several other shows and movies like ‘Men in Black, ‘Wings’, ‘The Man Who Wasn’t There, and ‘The Marvelous Mrs. Maisel’ among others.

Tony along with his wife Brooke tested positive for coronavirus in April 2020. But after weeks of treatment, this couple finally recovered from this pandemic.

Shalhoub was born as Anthony Marcus “Tony” Shalhoub in Green Bay, Wisconsin on October 9, 1953. He was born to parents Joe and Helen Shalhoub. Tony was introduced to acting by his older sister.

He is of American nationality. Furthermore, he belongs to the Lebanese ethnic background.

He has a bachelor’s degree in drama. Eventually, he received his master’s degree from the Yale School of Drama in 1980.

Tony Shalhoub initially spent four seasons with the American Repertory Theater. In 1985, he made his Broadway debut in Rita Moreno/Sally Struthers’s production of ‘The Odd Couple.’ Additionally, in 1986, Tony played the role of Terrorist Leader in the TV series ‘The Equalizer.’

In the same year, he also appeared as Airplane Passenger in the movie Heartburn.’ He also appeared as Seth Parker in the TV movie ‘Money, Power, Murder.’ Since then, he has appeared in several other movies and television series. At present, he has more than 100 credits as an actor.

Some other movie and television series that Shalhoub has appeared in is ‘The Marvelous Mrs. Maisel’, ‘Rosy’, ‘Tales from Radiator Springs, ‘Final Portrait’, ‘Mickey and the Roadster Racers’, ‘BrainDead’, ‘The Assignment’, ‘Custody’, ‘Guns for Hire’, ‘Nurse Jackie’, ‘We Are Men’, ‘Pain & Gain’, ‘Friday Night Dinner’, ‘How Do You Know, ‘Feed the Fish’, ‘Monk Webisodes’, ‘1408’, ‘The Last Shot’, ‘Stark Raving Mad’, ‘Ally McBeal’, ‘The Impostors’, ‘Radiant City’, and ‘An Affectionate Look at Fatherhood’ among others.

In addition, Shalhoub also has 5 credits as a producer and one credit as a director.

Tony has won the Golden Globe Award in 2003 for his performance in ‘Monk.’ Additionally, he also has four other nominations for the same award. Furthermore, he has also won the Primetime Emmy Award three times. All in all, he has 14 wins and 32 nominations for various awards to date.

Shalhoub has not revealed his current salary. However, he has an estimated net worth of around $20 million as of 2022.

Shalhoub has not been part of any notable controversies in his career. Furthermore, at present, there are no rumors concerning his life and career.

Talking about Tony Shalhoub’s body measurement, he has a height of 5 feet 10 inches and a weight of 72 kg. Additionally, his hair color and eye color is dark brown.