Updated On November 25, 2022 | Published By: Brandy Stratton | In Child , Net Worth , Wedding
Share this 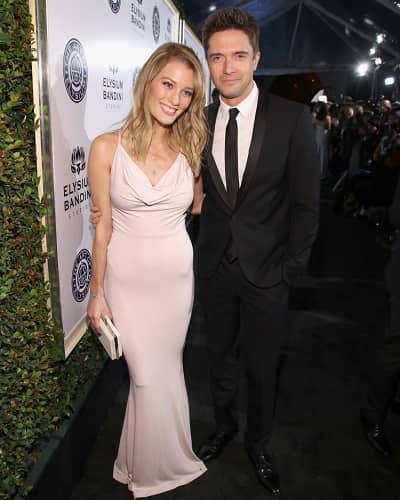 Update: Topher Grace’s second child was born in 2020. The couple has not revealed much about their children. Also, in September 2022, they revealed that they are expecting their third child.

Grace recently opened up to People magazine about the baby and said,

“We had a kid during quarantine a lot of changing diapers.”

The baby might have arrived by September as Ashley ran a 5k charity event. Topher added,

“Every day, I’m leaving my baby to come to work and work with two babies. n the script, it read very funny, and I’ve seen it now — it is very funny on-screen. But when I’m doing the scenes and my two scene partners are 9 months old, it’s challenging.”

Topher Grace and Ashley Hinshaw started their affair in the year 2014. After a year in January 2015, Topher proposed to her with a square-cut diamond ring.

On 29th May 2016, they decided to make their relationship forever. They married at a romantic private ceremony at an estate in Montecito, California in front of close family and friends.

Topher Grace has a net worth of $14 million. From That 70’s Show, he earned $250,000 to $350,000 per episode. He has worked in films like Irresistible, Breakthrough, Under the Silver Lake, BlackkKlansman, Delirium, Opening Night, War Machine, The Institute, Truth, American Ultra, and more.

In the year 2017, Topher and his wife Ashley Grace sold their two-bedroom condo in Los Angeles’ Hancock park for $860,000. Likewise, they also sold their loft in New York City’s West Village for $4.2 million.

Topher Grace is one of the good-looking actors in Hollywood. Topher Grace is famous for her roles as Eric Forman on the Fox sitcom That ’70s Show and many others like Eddie Brock/Venom in the Sam Raimi on the movie Spiderman 3. LikeTopher Grace’s best movie is Predators which was released in 2010. Read more bio…