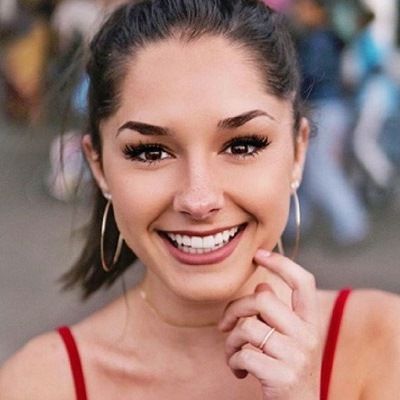 Tori Keeth once dated YouTube personality, Kyson Facer. In the year 2019, she started a relationship with Matt Sato. Sato is an actor and singer known for his role as Robby in the 2nd season of the web series ‘Chicken Girls’. As a singer, he has released many popular singles including “I Know” and “Airplane Mode”.

Who is Tori Keeth?

Tori is an American actress known for appearing in ‘Escaping the Prophet’, a TLC series that follows an ex-FLDS member who strives to bring down one of the most dangerous polygamist cults in the US. Also, she is a beauty and lifestyle blogger as well and has shared a number of videos on her self-titled channel on YouTube.

She was born in Seattle, Washington, the United States on December 23, 1998, and she is currently 20 years old. She was born to parents;  Dustin Keeth (father) and  Meagan Milner Keeth (mother). She has a sister, but her name is unknown. Tori holds American citizenship, but her ethnicity is unknown.

Keeth made her acting debut at the young age of 13 when she was cast in a Samsung commercial. She then appeared in a number of other small projects but didn’t earn widespread recognition until she began appearing in popular TV shows. In 2012, she garnered some popularity with her role as Allison Marshall in ‘Blood Relatives’. Narrated by Brenda Strong, the documentary series examines murders that had taken place within families.

In the year 2014, Keeth rose to stardom with her appearance in ‘Escaping the Prophet’, a TLC series that tells the story of an ex-FLDS member who is committed to bringing down one of the most hazardous polygamist cults in the US.

This was followed by her minor role in the sitcom ‘Speechless’. Starring John Ross Bowie, Micah Fowler, and Minnie Driver, the drama series explores both the humorous side and serious challenges a family faces with their disabled family member.

The actress joined the cast of ‘Henry Danger’ as a guest in 2018. The comedy series that premiered on Nickelodeon featured Cooper Barnes, Jace Norman, Riele Downs, Ella Anderson, Sean Ryan Fox and Michael D. Cohen in lead roles. In the year 2019, Keeth starred as Sophie Walker in the movie ‘The Message’.

Talking about her YouTube career, Keeth launched a self-titled channel on June 2013. Since then, she has been sharing videos on fashion, beauty, lifestyle-related topics, etc. on the channel. The most popular video of her channel to date is ‘Q&A: Boyfriend- New Projects-Clothes & more’. In this video, she answers some of the most important questions asked by her admirers, including her relationship status, favorite brands, upcoming projects, and so on.