Tori Spelling is a famous American actress, television personality, socialite and author. She is married and a mother of five kids. 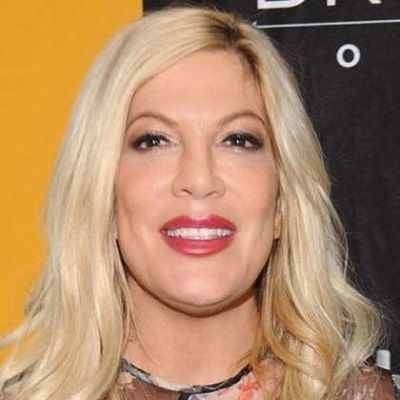 Babies, a lot of babies. I wanna be a hands-on mother completely. I don't wanna be at work every day and have nanny take care of them, that is not my idea of motherhood, so I would like to have that happy balance.

Dean has a great thing saying about me, he says I'm a truck driver in a girl's suit, which I think is very telling like I am the little girl, sweet, vulnerable and all that. And then you know I can swear like a truck driver, just be dirty and raunchy.

I do have odd habits. I check under my bed every night for the boogeyman. That's just a little thing, though.

Tori Spelling’s relationship status is happily married to Mind Over Murder 2005 co-stars Dean McDermott in 2005. They married on May 7, 2006 at a private wedding ceremony in Wakaya, Fiji.

Tori and Dean renewed their marriage vows on May 8, 2010, in California.

Previously, she dated an actor, Brian Austin from 1990 till 1991 and also Canadian actor, Jason Priestley for a short time.

Tori dated vocalist and musician, Vince Neil in 1992. Then, she dated British actor Nick Savalas, while she was working for Beverly Hills, 90210 and started living with him. Then, she broke with Nick in early 1995.

Moreover, she dated actor Greg Vaughan for some time. Tori dated the actor Vincent Young they first met on the set of “Beverly Hills, 90210.”.

Spelling dated actor and playwright Charlie Shanian in June 2002. She announced her engagement to Charlie in November 2003. Finally, on July 3, 2004, the couple got married in a lavish $1 million wedding ceremony.

Next year, in October 2005, the couple split and Charlie filed for divorce, which was finalized on April 20, 2006.

Who is Tori Spelling?

Tori Spelling is a famous American actress, television personality, socialite and author. She is well known from her first major role, Donna Martin, on Beverly Hills, 90210.

She appeared in a string of made-for-television movies including A Friend to Die For, A Carol Christmas, The Mistle-Tones and both versions of Mother, May I Sleep with Danger?.

Tori Spelling was born Victoria Davey Spelling on May 16, 1973, in Los Angeles, California, the United States. She is a  Taurus.

Her father is  Aaron Spelling, who was was a television, film producer and mother Candy Spelling, who is Author, TV personality. She is of Ashkenazi-Jewish ancestry.

She went to Beverly Hills High School in Beverly Hills, California but later shifted to Harvard-Westlake School, she graduated in 1990.

Tori appeared in shows such as Fantasy Island, The Love Boat, Vegas, Saved by the Bell and T.J Hooker. She appeared on Beverly Hills 90210.

She pitched her voice in the animation ‘Jake and the Never Land Pirates’ and played a role in the short humorous movie ‘Hoarders: Untold sTori’.

Her third book, ‘uncharted terriTORI’, in 2010. She released‘sTori TELLING’, an autobiography, for which she did a lot of promotional work.

She was seen in Big Brother 13 in the year 2011, she hosted the animated television series ‘My Little Pony: Friendship Is Magic’, in the finale of its second season, on April 21, 2012.

She appeared in the movies like The House of Yes, Scream 2, Trick, Scary Movie 2, Stewie Griffin: The Untold Story and Izzie’s Way Home. Tori continued starring in movies, including 2003’s A Carol Christmas and Mind Over Murder in 2005.

She created the reboot BH90210, the CW came up with their own modernized concept of the teen soap. Tori agreed to reprise her role as Donna in two episodes of the show’s first season. Her latest release was 2013’s Spelling IT Like It Is.

She won the People’s Choice Award for Favorite TV series, and a year later, it won the same title at the Kids’ Choice Awards.

There was a rumor regarding, Tori Spelling’s plastic surgery and claimed that she has been going on since she was 17.