Toya Bush-Harris is a Mentor, Children's Book Author of SleepyHead. She is a mother of two.

Toya Bush-Harris is a married woman. She is married to Emergency Medicine Physician Dr. Eugene Harris III. He is a board-certified emergency medicine physician who co-founded NomadMD LLC which is the emergency medical facility seen in Married To Medicine.

The couple first met while Toya was a pharmaceutical representative, and Eugene was completing his residency. After dating for a couple of years, they exchanged wedding vows on 20th June 2008. They have now been married for over 12 years.

From their marriage, they have two sons named Ashton and Avery. Unfortunately, she has suffered a miscarriage while she was seven weeks pregnant. 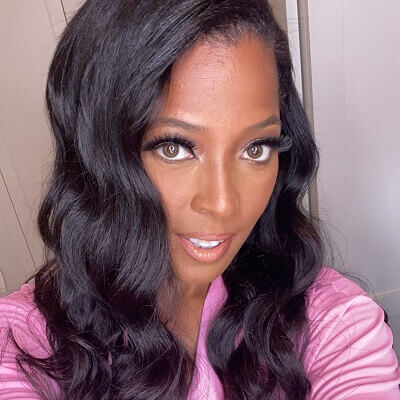 Who is Toya Bush-Harris?

Toya Bush-Harris is an American reality TV personality. She became famous after her appearance on the Bravo reality series, ‘Married to Medicine’. Moreover, she has also worked in Nomad MD, the family medical concierge business.

Toya Bush-Harris was born in Michigan, the USA on April 15, 1976, under the birth sign, Aries. As of 2020, her age is 44. She has not revealed much about her early life and family background and she became famous only after appearing in the Bravo reality TV series, ‘Married to Medicine’. Thus, there is little information about her early days.

Toya spent her childhood days in Michigan and her ethnicity is African-American.

Talking about her educational background, she went to Tennessee State University and earned her graduation from the University of Phoenix after which she started her career as a pharmaceutical representative.

Toya Bush-Harris is an American reality television star. She is a part of the main cast of ‘Married to Medicine’ which first aired on March 24, 2013. It follows the lives of seven women in the Atlanta medical community. Four of them are doctors themselves, while the other members are doctors’ wives.

Harris is one of the only four members who have been in the main cast from the first season. The other three include Dr. Jackie Walters, Dr. Simon Whiltomre, and Quad Webb-Lunceford. So far, seven seasons of the show have aired. The seventh season premiered on September 8, 2019.

Apart from being a reality TV star, she also works with Nomad MD, the family medical concierge business. Moreover, she volunteers at church and does philanthropy projects.

Furthermore, she has also written a Bedtime storybook titled ‘Sleepyhead Please Go to Bed’ dedicated the book to her two sons.

Toya has brown hair and similarly, a pair of brown eyes. She is 5ft. 4 inches tall and weighs 70 kg. There is no information about other body measurements. However, she seems to have attractive body measurements.

Bush-Harris has not been involved in controversy so far. She has been able to keep herself away from any type of controversy and scandal. So far, she has not done anything controversial in her career. She has kept her profile clean and has simply focused on her career and personal life.

You may also like to read the Bio, Career, Net Worth, Relationships, Social Media, and more about Haley Ferguson, Emily Ferguson, Landon Clements, and more.