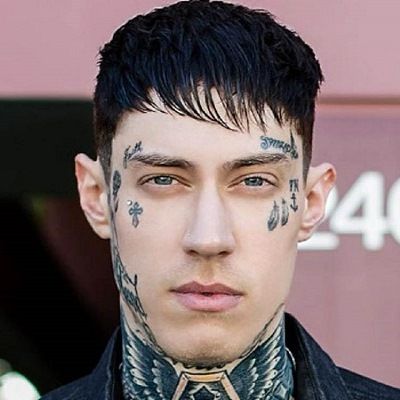 Trace Cyrus was in a long-term relationship with the American socialite Hannah Beth for 3 years. He had a brief encounter with the lingerie model Amor Hilton in May 2005.

Trace dated the well known American singer and songwriter Demi Lovato for a little more than 6 months, from April to October of 2009, even though some sources said they broke it off as early as July 22, 2009. The reason behind the break-up was main mainly because of time constraints due to busy schedules they both had.

Then, he dated American actress Brenda Song, the pair got together in May 2010 and dated for a year and a half until October 14, 2011, when Trace announced he and Brenda were engaged. A few months later, in June 2012, the couple announced they broke up, but got back together in January 2013.

However, they broke up once again in 2017. Trace started dating the socialite, model, and pole dancer Taylor Lauren Sanders in January 2018, and the pair got engaged on 6 December 2018.

Who is Trace Cyrus?

Trace Cyrus is an American musician, guitarist, and songwriter presently affiliated with the pop band ‘Metro Station‘, which he formed with Mason Musso. Likely, he was the backing vocalist and bassist of the band Metro Station, with time out between 2010 and 2014.

In the year 2010, he began providing vocals and guitar in the pop-rock band Ashland HIGH.

Trace Cyrus was born in Ashland, Kentucky, the United States on February 24, 1989. His birth name is Neil Timothy Helson. His biological father is Baxter Neal Helson.

Whereas, he was adopted by Billy Ray Cyrus, his mother’s second husband, and lived with them in Thompson’s Station, Tennessee. His mother’s name is Leticia “Tish” Cyrus.

Talking about his profession, during 2006, Trace Cyrus co-wrote a song called “Country Music Has the Blues,” which was a track on Billy Ray’s 2006 album Wanna Be Your Joe. Additionally, the song features guest appearances by Loretta Lynn and George Jones. In fact, Cyrus was a guitarist and vocalist in the pop-rock band Metro Station.

Likewise, he started the band with Mason Musso in early 2006 when their mothers set them up to do a jam together. Besides that, Musso’s brother Mitchel was a Hannah Montana cast member.

Additionally, Cyrus appeared with Musso on MTV’s Total Request Live on June 9, 2008. In addition, their band, along with Maine, were the two special guest acts on the 2008 Soundtrack of Your Summer Tour, co-headlined by Boys Like Girls and Good Charlotte. Metro Station parted ways in early 2010.

During 2013, Ashland HIGH has released two albums, “Geronimo” and “Drugstore Cowboy”. Likewise, in August 2014, Cyrus returned as a member of Metro Station with the band releasing a single titled “Love & War“.  Therefore, the band has since released a second studio album titled Savior.

Additionally, he also owns the clothing company From Backseats to Bedrooms.

Trace Cyrus has a height of 6 feet 3 inches and he weighs 80Kg. Trace’s hair color is black and his eyes color is light blue.