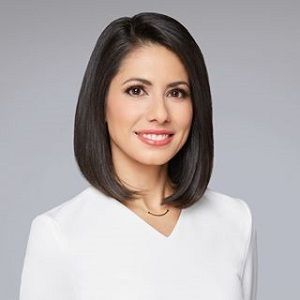 Tracee Carrasco is an engaged woman. Her fiancee her longtime boyfriend, Rodrigo. They are soon getting married, however, their wedding details is not yet revealed. The couple got engaged on 18 May 2018.

They were having an affair since 2014. She as well as her fiance, Rodrigo keeps sharing their pictures via their social media handle. Also, they have adopted a dog.

Who is Tracee Carrasco?

Tracee is an American television news reporter for Fox Business Network. She used to report for CBS 2 News, WCBS-TV and much more and working on it she gain popularity. Furthermore, she has been nominated twice in the Emmy award as a journalist.

Tracee was born on 29 March in Honolulu, Hawaii, United States of America. She belongs to American nationality. The reporter grew up in Honolulu and Southern California with her family. There is also no information about her parents and siblings.

Talking about her education history, she has completed her graduation from Azusa Pacific University in Southern California, with a degree in Communication Studies. While doing the internship, she worked out with different News channels like KABC-TV Channel, 7 NEws, KCAL-TV Channel 9 News and KCBS-TV Channel 2 and it helped her later to build her career.

Carrasco was also a college cheerleader and has a blue belt in Tae Kwan Do.

She started her journalism career from February 2010 in FOX KQDS network in Minnesota. There she worked as a weekend anchor and weekday reporter. Working there she used to cover the Wisconsin, Michigan and Upper Minnesota area and her work was loved by all.

For her work, she was also nominated in two regional Emmy award for the upper Midwest area. She left out there and moved to  Fox Business Network as a general assignment reporter.

And now she is working as a reporter at WCBS-TV in New York. There she worked out with Alice Gainer and Mary Calvi.

The reporter has always been appreciated for her works. Though she hasn’t received any awards yet. She receives the nomination for “Upper Midwest Emmy Awards“.

Tracee Carrasco: Salary and Net Worth

There are no any rumors about her personal and professional life. She maintains a private life out of social media when it comes to her personal matters.