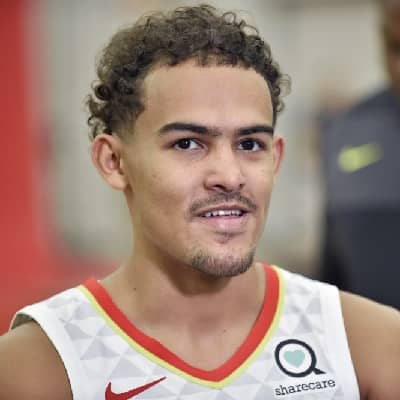 Trae Young is currently single. He has been pretty busy with his work as a Basketball player who is always focused. Trae might be in the relationship but is keeping it a secret for the sake of his privacy.

Who is Trae Young?

Trae Young is an American NBA player who currently plays for the basketball team Atlanta Hawks. Trae Young is best known for winning a gold medal in the 2016 FIBA Americas U-18 championship.

Trae Young was born in Lubbock, Texas, USA on 1998 September 19. Currently, he is 22 years old. Likewise, his full name is Rayford Trae Young.

He was born to Candace and Rayford Young. His father was also a basketball player in Europe. He was raised along with his younger brother, Tim, and two younger sisters namely Caitlyn and Camryn.

He is of American nationality and biracial – Afr0-American and Caucasian ethnicity.

He attended Norman High School and started his basketball from there. During his freshman year, he didn’t play basketball. However, he started playing during his sophomore year.

In 2004, Trae started his professional basketball career at Atlanta Hawks on July 1st, 2018, and soon became the player to score a season-high of 35 points against the Cleveland Cavaliers in his first season.

Later, he came up with the best performance in the second season with 36 points and made career-high eight 3 pointers in a 119-111 loss to the Houston Rockets.

Furthermore, he was also a national player in the US under-18 men’s that won a gold medal in the 2016 FIBA Americas U-18 championship.

Talking about his net worth, he has an estimated net worth of around $6 million.

Trae is a gold medal winner in the 2016 FIBA Americas U-18 championship.

Trae stands 6 feet and 1 inch tall and weighs around 82 kg. He has brown color hair and dark brown eyes. Furthermore, he fits in 12 US size shoes.

Update On Heath Of Beverly Broadus Green; Snoop Dogg Asks For Prayers For His Mother!