Posted by MarriedBiography Posted on March 3, 2021 | In Dating , Relationship
Share this 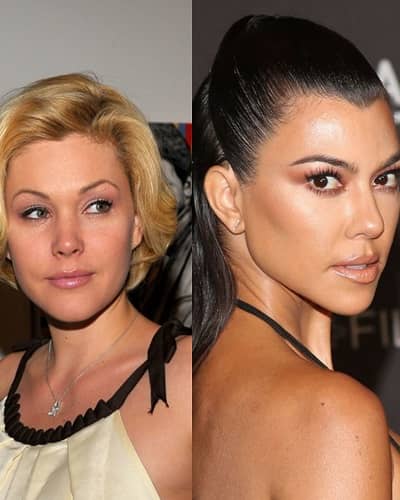 Travis Barker and Kourtney Kardashian‘s blooming love is not appreciated by Shanna Moakler!

“He’s my friend and co-parent, and I want him to be happy. If being with her makes him happy, and she’s happy, I’m happy for both of them, honestly. He can handle that Kardashian drama.”

One of the users commented on Shanna’s Instagram writing Travis downgraded. Shanna decided to add fuel to the comment and posted an Instagram story targeted to the eldest Kardashian daughter. The meme read,

“Stop complaining about your life. There are people out there dating your ex,”

The meme hit Kourtney hard so she posted a story from the lifestyle website Poosh which read ‘Stop social media stalking your ex’. The social media feud between the ex and present of Travis has been going on for a while and people are convinced that Kourtney is using her business to clap back.

Even though they are in silent wars, their child shares a good friendship with each other. Their social media fight might have made things difficult for Travis but he is focusing on his budding relationship with Kourt.

Also read Kourtney Kardashian: Is she ready for marriage now?

The new couple in the town, Travis Barker and Kourtney Kardashian are going strong. They have been friends with each other since the 2000s.

But their friendship took a long time to bloom into a relationship but when it did it turned out to beautiful. On 21st January 2021, Kourtney posted a gorgeous picture of her on Instagram where he commented. People started being suspicious of their relationship since then.

Two days later they made a similar post of the same poolside view on their Instagram. On 24th January, their dating rumor turned out to be true. Four days before Valentine’s Day they went out for dinner in Los Angeles which was filled with PDA. They finally made their relationship on Instagram official on Valentine’s Day.

Kardashian also wrote a note for him which reads,

“To lots of fun adventures. May we destroy each other completely. Love, Kourtney.”

Travis Barker is an American musician and producer. He is the drummer for the rock band named Blink-182. Read more bio…

All about Nick Austin and Madison Beer relationship timeline! How much is Madison’s net worth in 2021?
Tags : Blink-182 Singer