Travis Fimmel is an American actor and former model. At present, he is believed to be single.

Travis Fimmel was previously in a relationship with Joy Bryant. Additionally, he dated English singer Nicole Appleton during 1999 for a brief amount of time. In 2003, Travis dated Merrin Dungey and Jessica Miller.

Fimmel has also dated New Zealander model Rachel Hunger and American actress Mei Melancon. At present, he is believed to be single. 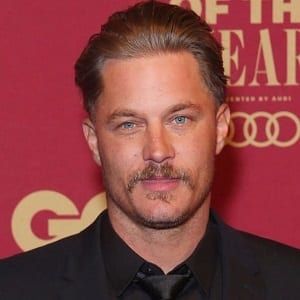 It's hard to live up to those photos. It isn't all really me. Thank God for computer editing and special camera lenses and lighting.

I prefer to play it rather than say it - and keep people thinking. My biggest thing with Ragnar was to make him someone the viewer can relate to, to show why he does some bad stuff. He does everything for his family and people. If that means chopping a few heads off, so be it.

I didn't get into acting to be famous, but to disturb people's sensibilities. To make people think, to make people relate to my character's pain and therefore feel that they're not so alone in their circumstances.

I want to always grow as an actor, and one needs the kind of role that affords that opportunity

Who is Travis Fimmel?

Travis Fimmel is an American actor and former model. People mostly know him for his role as Ragnar Lothbrok in the popular History Channel series ‘Vikings.’

Additionally, he has appeared in several other movies and television series including ‘Finding Steve McQueen’ and ‘Outlaw Country’ among others.

Fimmel was born in Echuca, Australia on July 15, 1979. He was born to parents Jennie Fimmel and Chris Fimmel. Throughout his childhood years, Travis grew up on a 5,500-acre dairy farm in Lockington. Additionally, he has two brothers.

As a child, he was interested in football, however, his professional career did not begin after he broke a leg. He is of Australian nationality. Furthermore, he belongs to the German ethnic background.

Talking about his education, Fimmel attended RMIT University to study commercial architecture and engineering. Later, he dropped out and decided to travel out of Australia.

Travis Fimmel initially began his career in show business after he was spotted working out at a gym by a talent scout for the Chadwick Models agency. Additionally, his first major role came after he was cast as John Clayton in the TV series ‘Tarzan.’

In 2005, he had a role in the TV series ‘Rocky Point.’ Since then, he has appeared in several other movies and television series. At present, he has more than 20 credits as an actor.

Some other movies and television series that Fimmel has appeared in are ‘Lean on Pete’, ‘Warcraft: The Beginning’, ‘Maggie’s Plan’, ‘Vikings: Athelstan’s Journal’, ‘The Baytown Outlaws’, ‘Outlaw Country’, ‘BlackBoxTV’, ‘Supremacy’, ‘Chase’, ‘Pure Country 2: The Gift’, ‘Needle’, ‘The Experiment’, ‘Ivory’, ‘The Beast’, ‘Surfer, Dude’, and ‘Restraint’ among others.

He garnered the IGN Award nomination in 2013 for his appearance in ‘Vikings.’

Fimmel has not revealed his current salary. However, he has an estimated net worth of around $13 million as of 2022.

There are several rumors which suggest that Travis dated actress Gina Gershon in 2016. He has not been part of any notable controversies in his career.

Talking about his body measurement, Travis Fimmel has a height of 6 feet (1.83 m). Additionally, he weighs around 86 kg. Furthermore, his hair color is blonde and his eye color is blue.