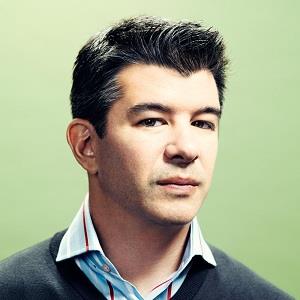 We have this culture valued at Uber, which we call the champions' mind-set. And champions' mind-set isn't always about winning. It's about putting everything you have on the field, every ounce of passion and energy you have. And if you get knocked down, overcoming adversity

We want transportation as reliable as running water

Sports uplift us. It's celebratory, gives us optimism and joy.

Infomation regarding past relationships of Travis Kalanick is not known. He has kept most of his personal information private with the rest of the world hence his past love-life and girlfriends cannot be found in the record.

He was in a relationship with Gabi Holzwarth, a violinist who interned at ‘Shyp’ for almost 2 years. The two were introduced to one another by Uber investor, Shervin Pishevar.

They began dating and the relationship was going strong until according to sources, Travis ended things with her due to increased pressure at work. They don’t have any children from this relationship. The future of his relationship status is not disclosed by Travis as of now.

Who is Travis Kalanick?

Travis Kalanick is an American Businessman, Computer programmer, and entrepreneur mostly known as the CEO of giant transportation network company ‘Uber’. He is also the co-founder of ‘Red Swoosh’, a peer-to-peer file-sharing company. He was listed as the 290th richest American by Forbes Magazine in 2014.

Travis was born on August 6, 1976, in Los Angeles, California. He has a mixed ethnic background of Czech, Ashkenazi Jewish, German and Irish.

He is the son of Bonnie Horowitz Kalanick(mother) and Donald Edward Kalanick(father). He lived most of his childhood in Northridge, California. He has a sister named Anji Arm and a brother named Cory Kalanick.

Travis attended Granada Hills High School and later joined the University of California, Los Angeles, to study computer engineering. Travis dropped out of UCLA to work on his file-sharing company.

Having learned to code at middle school, it doesn’t come as a surprise to anyone that he was very much interested in the world of technology and communication from an early age.

After dropping out of UCLA, Travis started working on a file-sharing company ‘Scour’. But his initial career didn’t go as planned and he soon found his startup sued for a quarter of a trillion dollars and filed for bankruptcy. Although a failed start, it didn’t stop Travis from pursuing his career in the field and he soon started searching investors such as Mark Cuban into backing a new startup, ‘Red Swoosh’.

Travis’s big break came after he along with his co-founder Garrett Camp came up with the idea for ‘Uber’, a mobile app that connects passengers with drivers of vehicles for hire and ridesharing services. They started with a small amount of $800 to hire private drivers and friends.

Uber currently operates in 66 countries and more than 507 cities around the world. Apart from his work at Uber, Travis is also a public speaker. He speaks at numerous conferences and business events. Some of the conferences include TechCrunch Disrupt, Tech Cocktail, and DLD among others. He also has an archived blog, swooshing where he shares struggles during his initial days in his career.

Started from the ground, he is now among the richest entrepreneur of this generation.

Travis Kalanick: Salary and Net Worth

Although his exact salary is not known, his net worth is estimated to be around 6.3 billion USD in 2017.

Travis has been involved in numerous controversies in his career. He was recently caught on video arguing with a driver about fares for which he apologized later on.

Travis has a height of 5 feet 8 inches and weighs 71 kg. His hair color is salt and pepper and eye color is brown. His shoe size is unknown.