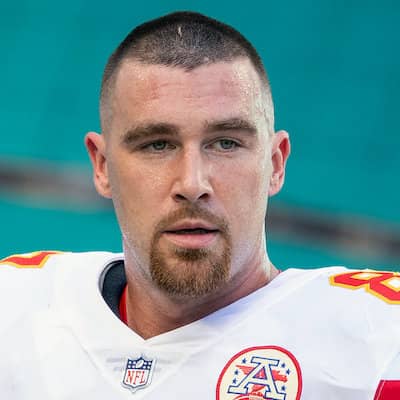 What is the relationship of Travis Kelce?

Travis Kelce’s relationship is taken. He is currently dating Kayla Nicole who is a social media influencer.

This couple met each other o Instagram and announced their romance via the same platform in May 2017. They also had a brief dispute in 2020 Aug and broke up.

However, they sorted things out and reunited after few months.

Travis previously was with Maya Benberry who was seen in Catching Kelce, a TV show. They left the show in April 2016 and started dating.

But shortly within months, in Jan 2017, they separated.

Who is Travis Kelce?

Travis Kelce is an American Football player who plays as a tight end. He is currently with a team named Kansas City Chiefs.

His birthdate is 05 Oct 1989 and he was born in Cleveland Heights, Ohio, the United States as Travis Michael Kelce. The name of his mother and his father is Donna and Edward Kelce respectively.

Travis’s ancestry is Polish-English-Scottish and has a brother Jason Kelce who is also a football player.

As per his academics, he studied at Cleveland Heights High School plus the University of Cincinnati.

Travis Kelce started to play football during his college days. He used to be in a Cincinnati team and debuted his NFL in the year 2013.

He was selected by a professional football team Kansas City Chiefs. Since his joining, he has played for several seasons.

In his tight end position, he has made records for Most 1000-yard receiving seasons, Most receiving yards in a season, and Most 100-reception seasons.

In 2022, his net worth is around $12 million US. His yearly salary from his contract is not revealed.

This tight-end player is keeping himself away from rumors and desperate scandals. But he appeared in a TV show Catching Kelce which was a disaster.

Travis Kelce’s height is 6 ft 5 inches and his body weight is 118 kg. In addition, he has blue eyes plus his hair color is dark brown.

Travis is available on social sites. His Instagram and Twitter accounts are with over 1.4m and 617k followers respectively.

Also, his Facebook is followed by more than 388k followers.