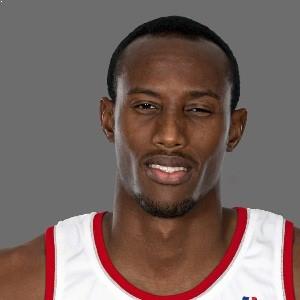 Reflecting on a personal life of Travis Outlaw, he is possibly single. There isn’t any information regarding his romantic relationship affairs. His personal life isn’t in the limelight as his career path is. He has kept his personal life far from the tabloids.

There isn’t any solid proof which leads towards his married lifestyle and children. Being a celebrity, his personal stuff is always a matter of discussion and interest to the public. Due to lack of much information about him, his fans are always curious to know more about him.

Who is Travis Outlaw?

Tall and handsome Travis Outlaw is a well-known American professional basketball player. He is currently a free agent who has played for different teams in the National Basketball Association (NBA). He plays from small forward as well as power forward.

American professional basketball player Travis Outlaw was born in Starkville, Mississippi on 18 September 1984. He is of African American ethnicity and has an American nationality.

He has two siblings, his sister’s name is Kaehla Outlaw and brother’s name is John Outlaw Jr. Since childhood, he has built up a strong interest in basketball games.

He studied at Starkville High School and played for Starkville Yellowjackets. Outlaw was considered a five-star recruit by Rival.com. He joined the NBA directly after high school.

Travis Outlaw started playing basketball professionally after being selected by Portland Trail Blazers in the 2003 NBA draft. In the 2005 Las Vegas Summer League, he was honored as the First Team All-RVSL. On 18 April 2007, he recorded a career-high of 36 points against the match with Golden State Warriors.

On 17 July 2007, he signed a three-year contract extension with the Blazers again after being a free agent. He was traded to Los Angeles Clippers in February 2010.

On 6 August 2014, Outlaw was traded to New York Knicks and again he was traded from the Knicks to Philadelphia 76ers on 27 October 2014. He was released from the team 76ers immediately and since then he has been a free agent.

Travis Outlaw: Salary and Net Worth

His salary is around 7 million USD according to 2012 records and net worth varies depending on the source so for now, we can say that his net worth has grown significantly.

He was rumored to be arrested for Drug and later the rumor came out to be true. Besides this, he has not been part of any rumors and controversy.

Moving towards his body measurements, he has a good height of 6 Feet and 9 Inches (2.06m) with bodyweight 94 kg. He has black hair color and his eye color is also black.