Travis Tritt is an American country music singer, and songwriter. He is also an actor. He is a married man.

Previously, he married his high school sweetheart, Karen Ryon in September 1982. At that time, he worked at an air conditioning company and Ryon worked at a Burger King. But the couple could not hold the relationship and end after two years in 1984.

After that, he married a 33-year-old woman named Jodi Barnett and at the time of marriage, he was only 21 years old.

Unfortunately, he divorced his wife shortly after signing into Warner Bros. The divorce was finalized in 1989. 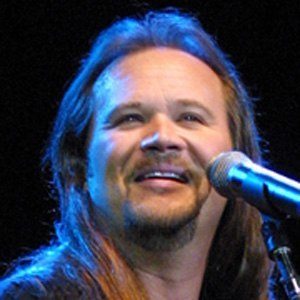 If you're gonna sing, sing loud.

I know what it takes to put a record together, so I'm not looking for people to come in and shape it.

Bluegrass is really a big part of my background.

Who is Travis Tritt?

Travis Tritt is an American country singer, actor, and songwriter. He has released 12 studio albums and also, and his songs charted more than  40 times on the Hot Country Songs charts.

He was born on February 9, 1963, in Marietta, Georgia, USA, as James Travis Tritt. He is currently 59 years old. His father’s name is James Tritt Sr. and his mother’s name is Gwen Tritt.

His parents got divorced and later, again remarried when Travis was 18 years old. He has got a sister named Sheila Tritt.

Travis holds American citizenship but his ethnicity is unknown.

Talking about his education history, he attended Sprayberry High School. Also, during his school time, he received his first guitar at the age of eight and taught himself how to play and later performed ‘Annie’s Song’ and ‘King of the Road’ in his school.

When he became 14 years old, his parents bought him another guitar and began learning more songs from his uncle, Sam Lockhart.

He used to work at a furniture store during his teen years and later worked as a supermarket clerk. Later, he began playing in clubs while he was working at an air conditioning company.

Then, Travis Tritt began recording demos for several years with the help of Warner Bros. Records executive Danny Davenport. His demo album titled ‘Proud of the Country’ was completed and he sent it to Warner Bros. representatives in Los Angeles.

In February 2006, Travis Tritt signed to independent Category 5 Records and released his album ‘The Storm’ via the label.

He left Category 5 Records to open his label named Post Oak label and released an album, ‘The Calm After…’ in July 2013.

He was nominated for six Country Music Association nominations and won five of them. In addition, he has been awarded Billboard Awards in 1990, Grammy Awards in 1992 and 1999, and many more.

He has an estimated net worth of around $35 million as of 2022, earned from his professional career.

There are not any big rumors or controversies about this singer. However, recently on May 18, 2019, he witnessed a fatal accident on Veterans Highway, Myrtle Beach. It was a car accident with the death of two people.

He has a height of 5 ft. 10 inches and weighs 85 kg. Travis Tritt has blue eyes, blonde hair, and a fair skin tone.

To know more about Lizzo, Juice Wrld, and Laci Kaye Booth, please click on the link.