Updated On November 23, 2022 | Published By: Arun Mehata
Share this
In Relation 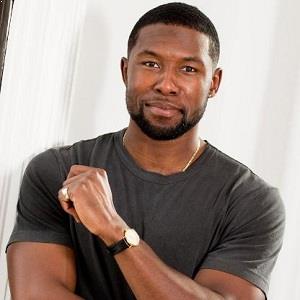 If we can fathom stripping away sexual orientation, skin color, sex, we're all the exact same: We just want connection. We just want love.

From start to finish, my experience with 'Moonlight' has been the most unique thing.

My mother is the most important person I know, and I try to be the same as she.

What is the relationship of Trevante Rhodes?

Trevante Rhodes is currently engaged to his girlfriend, Mara Wright.

Mara is a fitness Wilhelmina model and trained martial artist in Tae Kwon Do, karate, and jiu-jitsu. She is of German-African heritage. Her father is German and her mother is African.

In August 2019, there were rumors of their engagement, later it turned out to be true.

Trevante proposed to Mara and she said Yes! After that one of the family members shared a picture of them where she was seen flaunting her engagement ring. The couple was bestowed with tons of “Congratulations” messages.

Who is Trevante Rhodes?

Trevante Rhodes is an American actor and former track and field sprinter.

He is best known for his performance in the Academy Award-winning film, Moonlight. He’s also appeared on the TV series Westworld and If Loving You is Wrong.

Rhodes was born in Ponchatoula, Louisiana on February 10, 1990. He belongs to African-American ethnic background and American nationality.

His family later and moved to Little Elm, Texas when he was ten. Information regarding Rhode’s parents and siblings is not available. However, he said that he is very close to his mother in an interview.

In which school did Trevante Rhodes attend?

He attended Little Elm High School where he played running back in an option offense with Cole Beasley at quarterback and later earned four letters in both football and track and field. He earned an athletic scholarship in track and field to the University of Texas at Austin.

After his graduation, Rhodes moved to Los Angeles and soon began working as an actor, playing supporting roles in the Terrence Malick film Song to Song the Nacho Vigalondo film Open Windows opposite Elijah Wood and other movies.

He has since then been part of numerous movies and television series including I Came Back, Gang Related, The Infamous, The Night Is Young, Lady Luck, If Loving You Is Wrong, Moonlight, Westworld, Shangri-La Suite, Burning Sands, and more.

His performance in the movie Moonlight helped Rhodes to gain prominence in the Hollywood world.

Rhodes has a total of 7 wins and 13 nominations to his name as an actor. He won the Special Honorary Award in 2016 and also the Awards Circuit Community Awards.

He received several award nominations for his performance in the film. The film won the Golden Globe Award for Best Picture – Drama and the Academy Awards for Best Picture, Best Adapted Screenplay, and Best Supporting Actor for Mahershala Ali In February 2017, Rhodes was later featured on Calvin Klein’s 2017 Spring underwear campaign along with Moonlight stars Ali, Ashton Sanders, and Alex Hibbert.

Is Trevante Rhodes involved in any rumors and controversies?

Rumors were that Trevate is not single anymore. He is engaged to a fitness model, Mara Wright of German-African ancestry. The couple has not officially confirmed anything yet as of August 2019. But one of their family members shared their picture in which they were hugging each other and Mara was wearing a diamond ring on her ring finger.

Rhodes has a height of 6 feet (1.83 m) and weighs 88 kg or 194 pounds. Additionally, he has an athletic body and a French-cut beard with black eyes and hair. His shoe size is unknown.

American Actor Trevante Rhodes And His Love Life!! Know Is He Dating Someone Or Is Single? And His Role In Drama Moonlight