Updated On November 24, 2022 | Published By: Brandy Stratton
Share this
Married 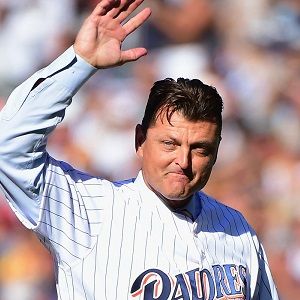 What is the relationship of Trevor Hoffman?

Trevor Hoffman is a married man. He met his wife Tracy Burke now Tracy Hoffmann in Buffalo, New York in 1992. She was a real estate agent and a member of the National Football League’s Buffalo Bills cheerleading squad.

Similarly, he asked her to marry him in the year 1993. She was on the field during Super Bowl XXVII, which the Buffalo Bills lost to the Dallas Cowboys, 52–17.

Who is Trevor Hoffman?

Similarly, he pitched for the Florida Marlins, San Diego Padres, and the Milwaukee Brewers, including more than 15 years for the Padres.

Likewise, he was the major leagues’ first player to reach the 500- and 600-save milestones and was the all-time saves leader from the year 2006 until 2011.

He was born on 13th October 1967 in Bellflower, California. He is the son of Ed Hoffman and Mikki Hoffman. Similarly, he has two brothers Glenn Hoffman and Greg Hoffman.

When he was 10 years old, he joined Glenn while he was playing in Pawtucket. Likewise, he belongs of American nationality and his ethnicity is unknown.

Talking about his education, he attended Savanna High School. Similarly, he went to Cypress College and attended The University of Arizona.

In his baseball career, Trevor Hoffman pitched for the Florida Marlins, San Diego Padres, and the Milwaukee Brewers and for more than 15 years for the Padres. Similarly, he was the major leagues’ first player to reach the 500- and 600-save milestones and was the all-time saves leader from the year 2006 until 2011.

He was inducted into the Baseball Hall of Fame as part of its class of 2018. He currently serves as a senior advisor for baseball operations for the Padres. Similarly, he played shortstop collegiately at the University of Arizona and was drafted in the 11th round by the Cincinnati Reds. He was converted to a pitcher, as he was able to throw up to 95 miles per hour (mph).

Similarly, he was acquired in the 1992 expansion draft by The Marlins, and he pitched in Florida until he was traded to the Padres mid-season in the year 1993. He recorded 20 saves in the year 1994 in his first season as Padres closer, and in the following years, he became the face of the franchise after Tony Gwynn retired.

After retiring as a player in 2011, he returned to the Padres as a special assistant in the front office. In the year 2014, he became the team’s pitching coordinator at their upper minor league levels, which included working with the Padres general manager. Further, his role expanded to overseeing pitching instruction at all levels in the minors.

He has received many awards and honors. He has won the MLB Delivery Man of the Month Award 4 times in 2005, 2006, 2007, and 2009. Similarly, he has won the Hutch Award, Lou Gehrig Memorial Award, National League Pitcher of the Month, and many others.

How much is the net worth of Trevor Hoffman?

For Cleveland Indians, he signed a $13.5 million, two-year contract and re-signed with Brewers for $8 million for 2010. Likewise, he has a house in Del Mar, California(CA), the US where he lives.

There are no big rumors and controversy about Trevor Hoffman. He is successful in maintaining his life away from rumors.

Trevor Hoffman has a height of 6 feet and his weight is almost 100 kg. Similarly, his hair color is salt and pepper and he has blue color eyes.

You may also like to read Joe Smith (a pitcher), Joe Kelly, and Justin Miller.