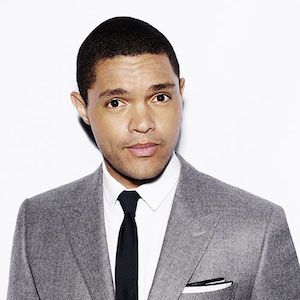 Often, people who can do, don’t because they’re afraid of what people that can’t do will say about them doing.

Comedy is a great tool. We [comics] are trying to find ways to use humor to enlighten people without preaching to them.

In my world, a woman was the most powerful thing that I knew. Still is. A woman made the money in my house

a woman made my food. A woman beat my ass when I wasn't a good kid. Women were behind a lot of what spurred South Africa toward democracy.

What is the relationship of Trevor Noah?

Previously, he dated Minka Kelly since August 2020. They were low-key about their romantic life but the reports of their split were in the media in May 2021.

He was also in a relationship with Jordyn Taylor, a formal singer since 2015. The two first met at one of Trevor’s comedy shows in New York. They seem to have the perfect relationship.

They two now share a luxury duplex penthouse on the Upper West Side of Manhattan. Taylor is a California native, but she moved to New York to be closer to him. Taylor has always supported Trevor in his career.

Before he was dating Dani Gabriel and their relationship, however, the couple separated. Gabriel has said that she is still proud of him and is happy for his success.

Who is Trevor Noah?

Trevor Noah is a South African comedian. He is also known as a writer, producer, political commentator, actor, and television host.

He is known for performing on The Daily Show on Comedy Central the host since September 2015.

Noah is a polyglot, he speaks English, Xhosa, Zulu, Sotho, Tswana, Tsonga, Afrikaans, and some German.

Trevor Noah was born on 20 February 1984 in Johannesburg, South Africa. His birth sign is Pisces. He was raised by his mother and grandmother.

His father is of white Swiss-German ancestry. Trevor’s mother’s name is Patricia Nombuyiselo Noah who is a Judaism.

His mother was jailed and fined by the South African government when she gave birth to Trevor. Interracial sexual relations and marriages were not legalized until the amended Immorality Act of 1985.

Noah’s mother Patricia Nombuyiselo was married to Ngisaveni Abel Shingange in 1992. They had two sons together, Andrew and Isaac. Trevor and his mother were both physically abused by Shingange, and the couple legally divorced in 1996.

In 2009, she married Sfiso Khoza. But Shingange shot her in the leg and through the back of the head.

Though she survived as the bullet went through the base of her head, avoiding the spinal cord. In 2011, Shingange(Noah’s father) was convicted of attempted murder and sentenced the following year to three years of correctional supervision.

Noah said that his mother seeks to police many times for justice but it was a norm in South Africa and the case never went to court.

During his childhood, Trevor Noah attended Roman Catholic church every Sunday. He spent his early youth at the private Maryvale College, a Catholic school in Johannesburg.

In 2002, Trevor Noah at the age of eighteen played a big role in an episode of the South African soap opera Isidingo. He then started to host his own radio show.

After some time of hosting he dropped his radio show and started acting in comedy, and also has performed with some South African comedians.

Noah started his career as an actor, presenter, and comedian in South Africa. Trevor Noah has held several television shows hosting with the South African Broadcasting Corporation and has also been the runner-up in their fourth season of Strictly Come Dancing in 2008.

Noah has performed in various movies and shows all over South Africa.

His movies include the Vodacom Campus Comedy Tour, The Blacks Only Comedy Show, the Heavyweight Comedy Jam, the Cape Town International Comedy Festival, the Jozi Comedy FestivalCrazy Normal (2011), That’s Racist(2012), and It’s My Culture (2013) between 2010 to 2013.

In 2011, he relocated to the United States. On 6 January 2012, Noah became the first South African stand-up comedian. In 2013, he performed the comedy special Trevor Noah: African American and he was influenced overall.

He has also written an autobiographical comedy book named Born a Crime: Stories from a South African Childhood and also  Spiegel & Grau.

Trevor’s work is appreciated and loved by all and he has too received different awards for his hard work.
He received NAACP Image Award for Outstanding Literary Work – Biography or Auto-biography for his book ‘Born a Crime’ in 2017.
Again in 2015, he received  MTV Africa Music Award for Personality of the Year. Likewise in 2017, he was rewarded with MTV Movie & TV Award for Best Host in The Daily Show.

Trevor Noah’s net worth is $100 million. He earns an annual salary of $4 million USD.

Noah resides in Manhattan, New York City. Trevor Noah bought this luxury home in 2017 and the Estimated Value of this Real Estate Property is around $2 Million.

It was once rumored that Noah’s cousin Cebisile Happiness Khoza, died over the weekend and her body was found in the field not far from Grey town.

Trevor says that his family was always victimized. But last, it was found that it was not her cousin but another woman.

Trevor weighs 75 kg. He is 5 ft 11 inches tall and has black-colored hair and dark brown eyes.

Likewise, he is also active on Instagram with approximately 7.2 million followers. He also uses Facebook and has more than 8.8 M followers.

Also, he has a Youtube channel with over 2.9 million subscribers.

Trevor Noah and Dua Lipa complimented each other on the singer’s podcast!