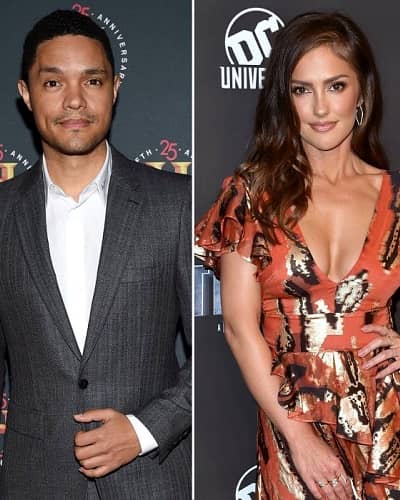 The Daily Show host Trevor Noah has been together with actress Minka Kelly. They have been dating each other for several months and things have started getting serious in their relationship.

As per a source, they have been living together in New York City for a while now. Due to the coronavirus pandemic, they were not seen together.

They are living together in his Manhattan apartment where he has been filming his Comedy Central show for six months.

“We’re in a similar position in more ways than we’ve ever been to many in our audience. We’re not coming to you from a glitzy, glamorous world. I’m not in a studio. I’m in my apartment.”

Talking about Trevor and Minka’s relationship they have successfully kept it away from the media and have remained tight-lipped about the rumors.

Also read the TLC show 90 Day Fiance’s Asuelu Pulau and Kalani Faagata having problems in their married life! Know about their relationship, social media, and more…

Who have Trevor Noah and Minka Kelly dated in the past?

Talking about Trevor Noah’s past relationship, he dated Jordyn Taylor back in 2015. They were first spotted walking hand in hand in New York. They went on several vacations together including trips to Bali, Mexico, Costa Rica, and Hawaii. Likewise, Trevor introduced Jordyn to his family from South Africa and brought her to Mzansi on at least two occasions.

They had a lovely 4 years of relationship. But in January 2019 their relationship came to an end. In a Q&A Jordyn confessed her feelings for ex-boyfriend Noah and said,

“Of course I love him. How could you not love him? I love him so much but you guys should know we broke up this past summer but yeah I love him.”

Fans hoped that they would get back together but with passing time they moved on.

Now moving toward Minka Kelly’s relationship, she dated actor Chris Evans in 2007 but broke up soon after. After that, she went on to date New York Yankees baseball player Derek Jeter from May 2008 to August 2011. Later, she reconciled with Chris Evans in 2012 and broke up again after a year in 2013.

While in quarantine, Trevor Noah checked in with The Ellen DeGeneres Show host to talk about his daily routine in quarantine. He joked about him being a ‘Cuomosexual’ after watching New York Governor Andrew Cuomo handling the coronavirus crisis. It is an actual term and was first coined by Bradford Sherman who created the Rivers Cuomo-related Facebook group.

Also read Brendon Urie flooded with #BrendonUrieSpeakUp on Twitter! Know about his problematic behavior, pansexual, net worth, and biography

The estimated net worth of Trevor Noah is $40 million. His salary is around $8 million. In 2019, he shell out $20.5 million for an eye-catching estate in Bel-Air. The home is built in 10,044-square-foot and has a pivoting front door made of paneled wood in the entry. The house features polished glass, leathered marble, and limestone touch up the open-concept floor plan.

Similarly, the house consists of five bedrooms and seven bathrooms, a chandelier-topped dining area, a double island kitchen, and a wet bar with a 500-gallon aquarium. Back in 2017, he paid $10 million for a never-lived-in-before 3,596-square-foot penthouse in Hell’s Kitchen.  It has 3 bedrooms, 3 full and 2 1/2 bathrooms, and a generous terrace with killer NYC skyline views.

Likewise, the American actress Minka Kelly has a net worth of $5 million. Her film work includes The Pumpkin Karver, The Kingdom, 500 Days of Summer, Searching for Sonny, Papa: Hemingway in Cuba, and more. Also, her TV work includes Cracking Up, American Dreams, Body Politic, Charlie’s Angels, Jane the Virgin, Titans, Legends of Tomorrow, and many more.

Trevor Noah is a South African comedian. He is also known as a writer, producer, political commentator, actor, and television host. He is known for performing on The Daily Show on Comedy Central the host since September 2015.