Trey is Director/Producer and President of Tri Destined Studios

Trey is currently single and has remained very private when it comes to his personal life. Because of his private nature when talking about his personal life, we do not know of his past relationships or past partners as well. 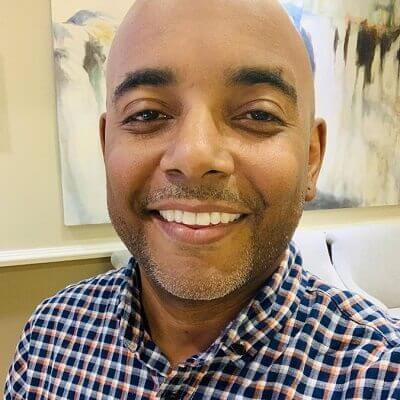 Who is Trey Haley?

Trey Haley is a popular American filmmaker and director. He is well known and respected for his work in the film and TV industry. His notable works include Carl Weber’s The Family Business, Throwback Holiday, and Man In 3B, among others.

He is also active as a mentor to many aspiring youths in the film and TV industry and frequently shares his expertise on the subject.

Trey Haley was born on the 28th of August, 1975 in Arlington, Texas, the U.S. As of July 2020, he is 45 years old. He was brought up in his hometown of Arlington, Texas, and had an interest in film from a young age which later shaped his career. Information on his parents or possible siblings is unknown as of now.

He spent his childhood days in Texas and his ethnicity is African-American.

Haley went to the University of North Texas after high school. There, he majored in Radio, Television, and Film. Where he went to high school is not known.

His career began fairly early, as he served as a cable programmer and editor while still attending university. After university, Haley moved to Los Angeles to pursue a career in TV and Film.

He was taught by some of the best music video directors in the industry and he got to hone his production skills at very good companies at the start of his career. He has been involved in the production and direction of some big movies and TV shows over the years.

His impressive resume includes TV show Carl Weber’s The Family Business, and impressive movies such as Throwback Holiday, Woman on the Edge, The Preacher’s Son, and Man in 3B to name a few.

Among these movies, Man in 3B has gone on to win the Best Film Award at the CAPRI Capital Partners Award in 2015 and was nominated in 2016 for Outstanding Independent Feature in the Black Reel Awards.

Currently, Haley works as the President and Partner at Tri Destined Studios. He also has a number of creative projects such as Black Gold, a documentary set to release in the near future.

Haley also shares his expertise regarding the technical, creative, and business aspects of TV and Film to the youth. He does this through speeches in colleges and other institutions and even helps the aspiring youth through forums and the like.

As of 2020, Trey Haley has an estimated net worth of $1.9 million. He accumulated this net worth through his ongoing career as a filmmaker in the movie and TV industry. He has not revealed his annual salary. For a little bit of reference, an average director makes around $67k annually in the U.S.

Haley has black hair and a pair of dark brown eyes. As of now, Trey has not made the information on his physical attributes such as height and weight available.

You may also like to read more about the Bio, Career, Net Worth, Relationships, and more Sadie Robertson, Katherine Webb, Draya Michele, and more.