Who is Treylon Burks girlfriend?

The newly engaged couple often shared glimpses of their relationship on social media platforms. Presently, Burks and Shelby are in healthy relations. 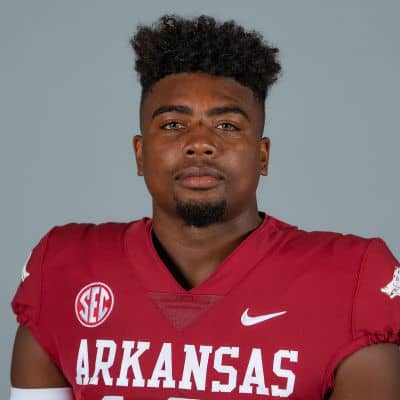 Who is Treylon Burks?

At Arkansas, he played college football and was drafted by the Titans in the first round of the 2022 NFL draft.

He ranked third in the SEC for yards per game.

Treylon Burks was born on March 23, 2000, in Warren, Arkansas. As of 2022, he is 22 years old. He holds an American national identity and ethnicity of Afro-Americans. According to the astrologist’s birth chart, his zodiac sign is Aries.

As per the sources, he was born to his mother Sha’Freda Stickerland, but he has not revealed his father’s name. Moreover, there is a dearth of information about his personal life.

Talking about his education, He attended Warren High School, where he played wide receiver for their football team and totaled 151 receptions for 3,403 yards and 43 touchdowns.

In 2018, he missed most of his senior season after tearing his ACL. To play college football he committed to the University of Arkansas On July 30, 2018. Along with that, in his high school, he also played basketball and baseball.

Being a true freshman at Arkansas, In 2019, Burks started nine of 11 games and recorded 29 receptions for 475 receiving yards.

By the Coaches, Burks was named 2nd Team All-SEC as a return specialist and was placed on the SEC All-Freshman Team by the AP and Coaches. later on, as a sophomore in 2020, he became Arkansas’ number one receiver with 51 receptions for 820 yards and 7 TD despite starting only 8 games.

In his junior season of 2021, he become only the fourth player in program history with over 1000 yards receiving in a single season and started all twelve games, and finished with 66 receptions for 1,104 receiving yards and 11 receiving TDs.

Along with that, he also had 14 carries for 112 yards rushing and 1 rushing TD. By the AP and the Coaches, he was named 1st Team All-SEC.

Apart from this, Arkansas would be invited to play Penn State in the 2022 Outback Bowl on New Year’s Day in Tampa after finishing the regular season 8-4, 4-4 in SEC play, and

He made a decision to forgo participation in the Outback Bowl and also skip his senior season, declaring his intentions to enter the 2022 NFL Draft.

As per the news, Arkansas would go on to defeat Penn State in the Outback Bowl, 24-10, finishing 9-4 on the season, and ranked #21 in the final AP Poll.

Treylon Burk is an American professional player. Further his net worth is estimated at approximately $1million- $2 million.

His annual salary and weekly earnings are missing.

There is no record of Treylon being involved in any rumors and buzzes. He has maintained a clean image and low profile.

Thinking about his professional career, he has not indulged in any part of controversy yet.

Treylon Burks is a tall young man with an athletic body of 6 feet 2 inches in height and a weight of 102kg.

Furthermore, he has brown eyes with black hair color.

He has highly active on all social media accounts, his verified Twitter account has more than 61.9k followers with 5235 following under the user iD @treylon_burks13.

His Twitter accounts have more than  27.8K Followers with 1435 Followings under the user id @treylon Burks.