Trina Braxton is an American singer, actress, and reality television personality. She is a younger sister of R&B singing icon Toni Braxton. She is married has two children. 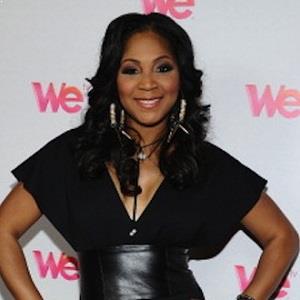 Trina Braxton has kept her personal life very low profile. She has been married twice, although there isn’t much information about her first husband.

Her second marriage was to Gabe Solis on August 10, 2003. The couple first met each other at a sports bar and dance club ‘American Pie’. After living together several years together they got divorced on April 30, 2015. They got divorced because they both admitted they were cheating.

Trina has two children, Eric and Caleb. She was the sister-in-law of Keri Lewis and Vincent Herbert. She started dating Jacent Lamar Mcrath and this relationship does not last long.

This star was engaged to her new husband Von Scales. Later in Dec 2019, this couple exchanged vows.

Who is Trina Braxton?

Trina Braxton is an American actress, singer as well as a reality television personality.  Trina Braxton is best known for her appearance on the reality show ‘Braxton Family Values’ which rated number 1 on the first season on WE TV.

Born as Trina Evette Braxton in Severn, Maryland on 3rd December 1974. She was born to mother Evelyn Jackson who was a formal opera singer, cosmetologist, and pastor, and father who was a Methodist, clergyman, and power, company worker.

Trina Braxton’s career journey started when she signed a record deal contract with Arista Records along with her four sisters in 1989 and released their first single ‘Good Life’.  Although they released their song they couldn’t gain many hits so eventually, they dropped from Arista Records.

Then the four sisters started to work as backup singers for their sister Toni Braxton. They were featured in the music video of Toni Braxton’s single ‘Seven Whole Days’ from her self-titled album. In 1993, they sign the deal with LaFace Records but they neither released their album nor singles.

In 1996, three sisters Tamar, Trina, and Towanda released their album ‘So Many Ways’ which got on to number 26 on the Billboard R&B/Hip-Hop Albums charts. Atlantic Records A&R Vice President, Bryant Reid served as the album’s executive producer. They were getting known by the people with their songs from the album.

Then she started to work on individually appearing in Tyler Perry’s play ‘Meet the Browns’ as Tracy Stevens. She appeared in numerous movies portraying roles as demanded. In 2009, she joined the wedding band ‘Simply irresistible’ as a lead vocalist. In 2011, she got reunited with her sisters for the WE TV reality show ‘Braxton Family Values. She was releasing songs as well as playing the song equally at ease in both media.

She released her debut single ‘Party or Go Home’ on March 22, 2012, in which the music video was directed by Derek Blanks. Then she started to release one song after another. She has even set up a recording studio ‘The Bass Mint’ in Atlanta which also helps to make films, television projects, and music videos.

In 2014, she launched her 1st hair collection line as well as launched her bar-company Bar-Chix. She is still currently engaged in the reality show ‘The Braxton Family Value’. Her success has paid her well financially which helped to own her an estimated net worth of $ 1.5 million.

Talented singer Braxton suffered a controversy once when there was a rumor that Tamar Braxton was practically at war with her four sisters. Later they were seen united.