Digital Creator Trisha Paytas is in a relationship. 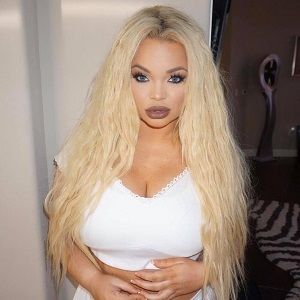 I think my life is quite boring, but apparently people like watching me eat takeout, and crying about my love life

Never look directly into the camera, stare off. Nobody wants to see those eyes, they want to see the bod.

The 33-years-old American singer, Trisha is in a relationship with Moses Hacmon. The couple is quite open about their affair hence keeps posting about their photos on their social media handle.

Initially, she dated David Lipper in 2006. The couple continued their relationship for almost a year and then broke up in 2007.

In the following year, she started dating Phil Varone and broke up shortly.

Back in 2008, Trisha started dating Anthony Michael Hall and carried their relationship for five years. In 2013, the couple split up.

Additionally, she was also spotted with Crispin Glover and Aaron Carter. Moreover, she has been going out with Sean van der Wilt and also made several videos on her YouTube channel. Later in 2017, the couple separated.

Who is Trisha Paytas?

Moreover, she is also a social media personality with more than 423k followers on Twitter and almost 624k followers on Instagram. As a musician, she has launched seven albums as well as also appeared in dozens of TV shows.

Trisha was born on May 8, 1988, in Riverside, California, USA. Talking about her nationality, she is American and her ethnicity is Hungarian. She is the daughter of Lenna Paytas and Frank Paytas.

Her childhood was not so easy as her parents separated when she was just three years old. Moving towards her education, she attended a local high school in Pecatonica.

Trisha began her career as a lingerie model. She also worked as a stripper. Later, she appeared on The Greg Behrendt Show as a correspondent to Greg Behrendt. Back in 2007, she started her YouTube channel, ‘blndsundoll4m”.

Furthermore, she also starred on various television shows such as The Price Is Right, The Ellen DeGeneres Show, Huge, Modern Family, and much more. Moreover, Trisha has also featured in music videos of Jamey Johnson and Amy Winehouse.

In 2009, she played Jessica Simpson in the Eminem music video We Made You. Additionally, she appeared in Viral Video along with Richard Grieco followed by its sequel Viral Video 2.

Later, she landed five other albums named, Under the Covers, Daddy Issues, Showtime, Warrior, and Chicken Fingers, and Lipo.

Apart from that, the American YouTuber has also appeared in several films which include Faster, Geezas, Wanderlust, Water & Power, Lola’s Love Shack, and a few others.

In addition, Trisha is also a social media personality earning more than 423k followers on Twitter and almost 1.5 million followers on Instagram.

So far, she has not won any awards in her career. Although, she has been doing a great job in her field and her works have been also loved by many people around the world.

Being a famous singer and YouTuber, she earns a massive amount of money from her profession. However, her salary is unknown and she has an estimated net worth of $10 million.

Trisha has been facing huge controversies for her several videos on YouTube. Besides this, there are not any drastic rumors regarding her personal and professional life.

Trisha has a height of 5 ft 4 inches and weighs 81 kg. Moreover, she has a pair of blue eyes and blonde hair. Apart from that, her body measurements are 42-27-38 inches.

Furthermore, she has around 535k followers on Facebook. Additionally, Trisha also runs a YouTube channel on which she has earned over 1.47 million subscribers.