Trisha Yearwood is an American country music singer and is also an author, actress, and chef. Trisha is married to Garth Brooks. He proposed to her in front of 7,000 fans. 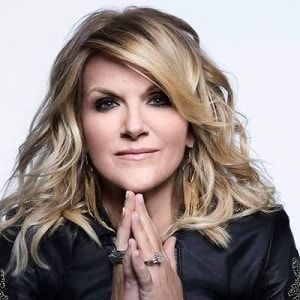 Songs are like movies to me, and so you put yourself in the movie. You become a character in the movie. The new ones are exciting because they're fresh. But if it's not that, if the story is not what you get into, maybe it's the crowd response. You hit the first chords of 'She's In Love With The Boy' and 20,000 people start to scream, you're pretty motivated. You get what you need. And it's a great story. It works.

I've been blessed to live a lot of dreams. But finally looking the way I want, feeling better than I ever knew I could and wearing tucked in shirt with a black leather skirt - that is way up there!

The pair later got married on December 10, 2005. The wedding ceremony took place in a private ceremony at the couple’s home in Owasso, Oklahoma.

She initially married her first husband, musician Chris Latham, in 1987. The marriage did not last long and hence the pair divorced in 1991.

Next, she married Robert “Bobby” Reynolds, a bass player for the country music group The Mavericks on May 21, 1994. This marriage resulted in a similar outcome as they divorced in 1999.

Who is Trisha Yearwood?

She is a member of the Grand Ole Opry. Furthermore, she was inducted into the Georgia Music Hall of Fame in 2000.

Trisha Yearwood was born in Monticello, Georgia, the United States on September 19, 1964, as the daughter of Gwendolyn(mother), a schoolteacher, and Jack Howard Yearwood(father), a local banker. As of 2021, she is 57 years old.

She has two brothers: Adam Thomas and Scott Thomas. Throughout her childhood years, she grew up listening to country artists Patsy Cline, Kitty Wells, and Hank Williams.

In addition, music became a huge part of her early life as she used to sing in musicals, choir groups and talent shows since her time in elementary school.

Trisha attended the Young Harris College in the mountains of northeast Georgia. There, she received an associate degree and became a member of the Phi Theta Kappa honor society.

Later, she attended the University of Georgia in Athens but after she grew unhappy with the school’s large campus, she dropped out.

Initially, Trisha gained an internship with MTM Records. Next, she began working as a full-time employee.

Trisha released her self-titled debut album in 1991 under MCA Nashville. The album’s lead single titled ‘She’s in Love with the Boy’ peaked at number 1 on the Billboard Country Chart in late 1991.

This helped her to bring nationwide success and recognition. The other three singles from her debut album also reached the Top 10 on the country chart.

Furthermore, she released her second studio album, ‘Hearts in Armor’ in 1992. The album was loved by many and was critically acclaimed.

Next, she released her third album in 1993 entitled ‘The Song Remembers When’. Additionally, the album was later accompanied by a cable television concert special in 1993. Rolling Stone gave the album a positive review. Furthermore, she released her fifth studio album, ‘Everybody Knows’ in August 1996.

All in all, she has released 12 studio albums in her career.

She released her first cookbook co-written with her mother Gwen and sister Beth entitled ‘Georgia Cooking in an Oklahoma Kitchen’ in April 2008.

Furthermore, she has won several awards in her career. She won the Emmy Awards in 2013 for the Outstanding Culinary Program; Trisha’s Southern Kitchen. Additionally, she won the Grammy Awards in the category of Best Country Collaboration with Vocals in 1995.

Trisha has an estimated net worth of around $400 million. She has led a successful musical, cooking, and acting career throughout the years.

Her husband Garth has around $330 million of net worth.

Trisha Yearwood became part of a rather controversial moment during the 1998 Grammy Awards.

She successfully handled an uncomfortable situation with a class during the award show after for the first time two artists were nominated for the same song within a single Grammy category.

Furthermore, she was rated one of the worst dressed celebrities in the 2019 CMA Awards, Red Carpet.

Trisha Yearwood is quite active on social media. She has a huge number of followers on social networking sites such as Facebook, Twitter as well as Instagram.

How did Trisha Yearwood and Garth Brooks celebrate their 16th wedding anniversary?