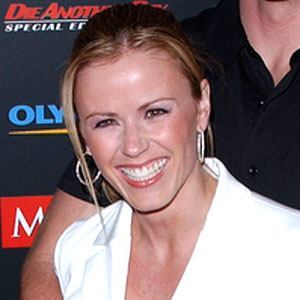 If I actively practice gratitude, I am able to keep myself grounded in the high times and lift myself up in the low times

Reflecting on the personal life of Trista Sutter, she is a married woman. She married Ryan Sutter on 6 December 2003 and their marriage was aired on ABC.

The couple is blessed with two children, Maxwell Alston Sutter, Blakesley Grace Sutter. She is living a happy married life and resides in Eagle County, Colorado.

Who is Trista Sutter?

Gorgeous and beautiful Trista Sutter is an American renown television personality. She is best known as the first Bachelorette who was also the runner-up of ABC’s The Bachelor before getting her own show. She also competed on Dancing with the Stars and NBC’s Fear Factor.

Trista Sutter was born in Indianapolis, Indiana, on 28 October 1972. She is of North American ethnicity and has an American nationality.

She is the daughter of Stan(father) and Roseanne(mother). Her birth name is Trista Nicole Rehn. There is no information on her siblings. She is frequently called by her nickname Triscuit.

She seemed to be a pretty private person who hasn’t revealed much regarding her personal life. There isn’t much information regarding her early life and childhood.

Talking about a career journey of Trista Sutter, she started out as a cheerleader for Miami Heat basketball team in the early 2000s. Then she appeared as a contestant on season 1 of ABC’s The Bachelor. Although she couldn’t win the show she has won so many hearts of her fans and followers. She was known to the world with her appearance in the reality television series.

Then she was selected to be featured in the gender-reversed spin-off, The Bachelorette where she chose Ryan Sutter as the winner and they got married on 6 December 2003 which aired on ABC.

In 2003, she also appeared on Brad Pailey’s music video “Celebrity”. She appeared as a guest on NBC’s Fear Factor cheering Ryan Sutter who was a contestant. In 2014, they have appeared together on the Marriage Boot Camp: Reality Stars and in  Bachelor Fan Favorites Week on Who Wants to Be a Millionaire in 2015. She is also a member of the Alpha Chi Omega Sorority.

Trista Sutter: Salary and Net Worth

Although it’s hard to put up an actual annual salary in the figure, her net worth is estimated to be $2 million. There is no doubt that she is living a luxurious lifestyle.

She suffered controversies for her two-year battle with infertility and when she reveals effects of plastic surgery makeover.


Trista has a height of 5 feet 2 inches. Her hair color is brown and eye color is hazel. Her weight, shoe size, and dress size is unknown.