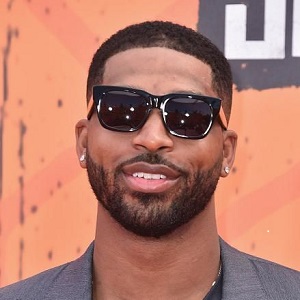 I try to be the best I can be at what I can do, and that’s playing hard &

We've been able to handle any team that you guys put in front of us. We've had confidence since day one. ... We feel like any team we play against, we've got what it takes to put ourselves in a position to win

It's like the basket is an ocean and everything you throw up is going in. You get into that kind of groove, and it's all good.

Tristan Thompson was in a relationship. He was dating Khloe Kardashian. She is a reality star. They started dating from September 2016 but were separated in 2019.

They met on a blind date arranged by his fellow basketball player and friend Brandon Jennings. There was news of her pregnancy as well. It has turned out to be true now as Khloe is pregnant.

Then in April 2018, this couple is blessed with a daughter, True Thompson. They are not together but are spending quarantine days with each other.

Prior, Tristan has been in a relationship with model Jordan Craig from 2014 to 2016. He has a son named Prince Thompson with Jordan who was born on 12 December 2016.

Who is Tristan Thompson?

Tristan Thompson is a Canadian professional basketball player for the Cleveland Cavaliers of the National Basketball Association (NBA). He played one season of basketball for Texas before being drafted fourth overall by the Cavaliers in the 2011 NBA draft.

He also represents Canada in international competition. In 2016, he won an NBA championship with the Cavaliers. Since January 2016, he has held the NBA’s longest active consecutive games played streak.

Tristan Thompson was born on March 13, 1991, in Toronto, Ontario. His nationality is Canadian.

Both his parents were athletic. His mother, Andrea, ran track, and his father, Trevor, played soccer. He has three younger brothers, Amari, Daniel, and Deshawn.

Thompson attended St. Marguerite d’ Youville Secondary School in Ontario followed by Saint Benedict’s Preparatory School in New Jersey. He continued his education at the University of Texas at Austin.

Tristan Thompson made his mark during his time at St. Benedict Prep. He also played basketball briefly for Findlay Prep in Nevada. He was also a member of the 2010 World Select Team at the annual Nike Hoop Summit.

Thompson was named McDonald’s All-American his senior year. He committed and played one season of basketball for the Texas Longhorns. Tristan played 36 games and averaged 13.1 points, 7.8 rebounds, and 2.4 blocks.

He led the team to a season record of 28 wins and 8 losses. He also earned Big 12 Freshman of the Year honors for his effort. Tristan was selected by the Cleveland Cavaliers with the 4th overall pick in the 2011 NBA draft. He signed a rookie contract on December 9th, 2011, and played his debut game against the Toronto Raptors on December 26. Thompson was named to the NBA All-Rookie Second Team for the 2011-12 season.

Tristan represented Team Shaq in the 2012 Rising Stars Challenge. He averaged a career-high 11.7 points, 9.4 rebounds, and 1.3 assists per games for the 2012-13 season. He made a playoff appearance in 2015 and 2016. Thompson won the 2016 NBA championship alongside teammates LeBron James, Kyrie Irving, and Kevin Love.

The Cavs defeated Stephen Curry and the Golden State Warriors after trailing the series 3-1. He signed a 5-years $82 million contract with the Cavaliers in 2015.

He has a net worth of $35 million but his salary is not revealed yet $ 14 million.

In addition to engagement rumors, There also a rumor that Khloe’s expecting their first child which is ESPECIALLY controversial considering that Tristan’s ex Jordy C due to give birth soon.

Hit the flip for Khloe’s response to the pregnancy rumors. The debate over the Tristan Thompson controversy has been a hot topic among various media Outlets. Thompson also took Part in an uncomfortable interview with FSO reporter Allie Clifton.

In the interview, Thompson called Clifton “Tina” and then subsequently Kissed her on the Cheek.

Tristan Thompson has a height of 6 feet 9 inches. His body weighs 108kg. He has black hair and black eyes.

Khloe Kardashian and Tristan Thompson wants a daughter again! True Thompson to be a big sister!