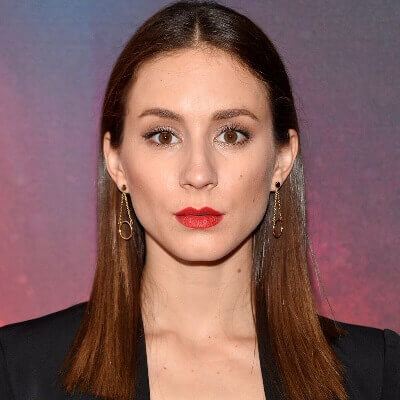 Just remembering that they [people with eating disorder] are young, beautiful and unique and that is worth everything in this world.

Falling is scary but good practice for life. We must fall. In love. Out of love. Into new experiences. Out of old habits. Deeper and further into ourselves. We must fall, life is falling over forward. The only choice we have is how we let go.

My high school was a private school where you went to an Ivy League. That's just what was expected of you and nothing less. So I grew up never being okay with a 'B' because a 'B' was not good enough.

Troian Bellisario is happily married to Candian actor, Patrick J. Adams. Adams is best known for his portrayal of Mike Ross in ‘Suits’. They started dating in 2009 after meeting in the set of the play Equivocation but briefly split before eventually getting back together in 2010.

The couple has worked together in TV series, movies, and short movies such as Equivocation, Pretty Little Liars, The Come Up, Suits, Clara, and We Are Here. They confirmed their engagement in February 2014. After dating for around 7 years, they exchanged wedding vows on December 10, 2016 in Santa Barbara, California.
From their marriage, they have a daughter named Aurora whose birth was announced in October 2018.

Who is Troian Bellisario?

Troian Bellisario is an American actress famous for her portrayal of  Spencer Hastings in Pretty Little Liars. Some of her other well-known works came in Quantum Leap, First Monday, NCIS, Billboard Dad, Consent, etc.

Troian Bellisario was born as Troian Avery Bellisario in Los Angeles, on October 28, 1985. As of 2020, her age is 34. She was born to parents Donald P. Bellisario (father) and Deborah Pratt (mother). Both of her parents are well-known producers.

Her father created Magnum, P.I., Quantum Leap, NCIS, etc. She has one younger brother, three half-sisters, and two half-brothers. Her half-brothers, Sean Murray and producer Chad W. Murray both are in the entertainment industry and work as an actor and producer respectively.

She spent her childhood days in California. Her ethnicity is Italian, Serbian, African-American, French, and English.

Talking about her educational background, Troian attended Campbell Hall School. After completing her high school studies, she attended Vassar College. In 2009, she graduated with a Bachelor of Fine Arts degree from the University of Southern California.

Troian Bellisario started her acting career very early thanks to her parents. At the age of three, she appeared in the movie, ‘Last Rites’ (1988). Following that, she made appearances in TV series ‘Quantum Leap’ and ‘Tequila and Bonetti’.

In 1998, she co-starred in the flick, ‘Billboard Dad’ with Ashley Olsen and Mary-Kate Olsen. Following that, she landed roles in several short films including ‘Unspoken’, ‘The Come Up’, ‘Archer House’, ‘Intersect’, ‘Amy’, ‘Immediately Afterlife, etc.

In 2009, Bellisario landed a role that would define her career and be her best-known work. She was cast in the ABC’s TV show ‘Pretty Little Liars’ as Spencer Hastings. As one of the main characters of the series, she appeared in 165 episodes from 2010 to 2017. For her work as Hastings, she received the Teen Choice Awards for Choice Summer TV Star.

In 2010, she portrayed Amanda in the flick, ‘Consent’. In 2010, she won the Vision Fest ‘Best Acting (Female Lead)’ award and the ‘FirstGlance Philadelphia’ award for the ‘Best Actress’ for her work in Consent.

In 2014, she made appearances in ‘Pa-gents with Chris’ and ‘Suits’. The following year, she landed the leading role in the movie ‘Martyrs’ and also appeared in the web series ‘Instagram Intervention with Troian Bellisario’.

Bellisario stands at a height of 5 feet 7 inches and weighs around 54 kg. Her body measurements for breasts, waist, and hips are 30-24-33 inches. She wears a bra size of 30 A and a dress size of 2 (US). Her hair color is brown, and similarly, her eyes are also brown in color.

Troian Bellisario has an estimated net worth of around $10 million as of 2020. Her primary source of income is acting. Although she has not revealed her annual salary, on average, actors earn around $40k per year.

In 2014, Bellisario was a subject of controversy along with her other Pretty Little Liars co-stars, Lucy Hale, Shay Mitchell, and Ashley Benson. The Pretty Little Liars stars appeared in the GQ magazine in a picture that was criticized by many. In the picture, the four actresses were wearing tiny bikinis and frolicking at a pool. Moreover, they were trying to help a random muscled guy get rid of a towel around his waist. People were upset about the photoshop used in the picture.

Regarding the controversy, she wrote a lengthy paragraph on Instagram explaining about the shoot;

“So by now you have seen many a shot from #GQ and many people have said that we were photoshopped… OF COURSE WE WERE! that’s a very specific type of photoshoot. And looking very blown out and perfected was obviously what they were looking for. Great. Cool. As long as we acknowledge how it was achieved so we know it’s not real.”

“[I]t’s the same everywhere. It’s the same way on the posters of our show and even in women’s magazines. This industry seems to invest more in perfection than in flaw. But flaw and individuality, to me, are what make a human being interesting, they make our stories worth telling. (Unfortunately, the flaws don’t usually sell products or magazines).”

You may also like to read more about the Bio, Career, Net Worth, Relationships, and more about Lucy Hale, Shay Mitchell, Ashley Benson, and more.