Troy Polamalu is a football player who was with the Pittsburgh Steelers of the NFL. He is married.

Tory has been relatively secretive regarding his personal life. And it looks as if, he is enjoying his retired life with his family. Since there are not any rumors or news about his affairs, he must be very happy with his marriage. So we can only wait and see if he reveal his other relationships to us if there is any. 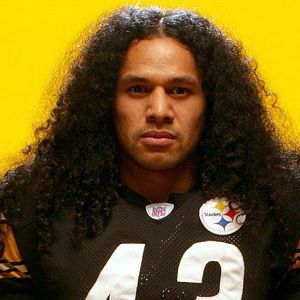 Success in football doesn't matter. Success in anything doesn't matter. As Mother Teresa said, God calls us not to be successful but to be faithful. My prayer is that I would glorify God no matter what, and not have success be the definition of it.

Look at the passion for life that he [Jesus Christ] lived as portrayed in the Stations of the Cross - that fight that he had in him, as well as the love he shared with others. There's no difference.

Who is Troy Polamalu?

Troy Polamalu is an American former football player. He played as a strong safety for the Pittsburgh Steelers of the National Football League. His professional career lasted for 11 years and played for Pittsburgh Steeler during his career in NFL.

Troy Aumua Polamalu was born on April 19, 1981. His mother Suila Polamalu gave birth to him in Garden Grove, California. But his father’s identity is currently under shades.

He also has three sisters, Lupe Aumua, Tria Aumua, and Sheila Aumua and a brother, Sakio Aumua. And, he belongs to Samoan descent.

Troy graduated from the University of Southern California where he got an athletic scholarship and played for the football team of his University. Also, he attended Douglas High School in Oregon.

In 2003, he included his name in the NFL draft. There he was picked by Pittsburgh Steelers and he signed the five-year contract worth $12.10 million. And, he played only for Steelers in his long career. In his debut season, he mainly played on special teams and in the dime package.

He was very promising in the 2004 season where he finished with his 96 combined tackles, 10 pass deflections, 5 interceptions, and one touchdown. And in the following season, Tory ended the season with similar figures. In 2007, he again signed a four-year extension with Steelers which worth $30.19 million with $15.37 million guaranteed. Furthermore, he signed other numerous million-dollar contracts as well. On April 10, 2015, he announced his retirement because of his family reason.

Other than being a professional player, he is also an investor in Arenda Capital. Arena Capital is a real estate investment company and shares the profit among the shareholders. In addition, he has also invested in LYFE kitchen.

Other than this, he also has featured on the cover page of Nation Football League Megastars and Madden NFL 10. He has also provided his voice in the movie Moana. And, he also has appeared in a commercial.

Troy Polamalu: Salary and Net Worth

During Tory’s professional practices he has done some million dollar contracts. As a result, his net worth is more than $30 million as of 2022. And, since he is now retired, we are not aware of his current salary.

After Troy’s retirement, there were several rumors addressing his comeback. However, there has not been any official news of such kind.

In 2011, he was fined $10,000 for calling his wife from the sidelines after a brutal hit. He contacted his wife with a cell phone when he was on the bench. And he was even forced to leave a game.

Other than these, there are not any major rumors and controversial topics relating to him.

Tory is 5 feet 10 inches tall guy. His long curly hair has been his notable appearance throughout his career. He also weighs about 94 Kg. In addition, his eyes are brown and his hair is black.