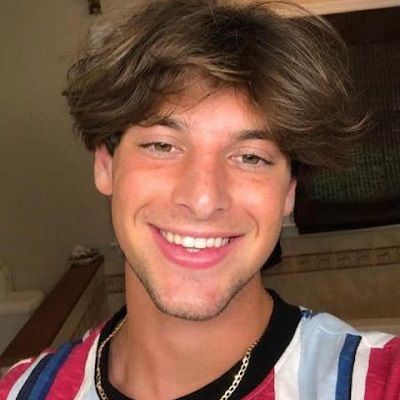 The 17 years old TikTok star Troy Zarba is currently single. He makes videos with many other TikTok stars.

He enjoys surfing and skating according to his social media photos.

Who is Troy Zarba?

Troy Zarba is an American social media star. Troy is known for his TikTok videos that went viral.

He is well-known for making vlogs and comedy videos on TikTok.

Troy was born on 8th January 2002 in the United States. He is from Long Island, New York. Troy’s full name is Troy Juliano Zarba.

Zabra started making TikTok videos from 2019. Previously, his name was ‘gnarboi’ on TikTok. He has around 2.2 million followers on TikTok.

Similarly, he has gained 94.5 million likes. He gets thousands of views on his TikTok videos. On TikTok and Instagram, he shows the thrift store clothes and shopping.

Likewise, he makes videos with his squads who are Zachary Smith, Lakota Johnson, and others. He got 1.4 million likes on the video, he made with Dixie D’Amelio and Addison Rae. They are his fellow TikTokers.

Troy has an estimated net worth of $100 thousand US. He has uploaded only one video on YouTube and his YouTube earning is estimated to be $1 thousand US.

Troy has around 412k followers on Instagram. He has followed accounts like Michael Gruen, Ben Azelart, Bryce Hall, Adi Fishman, and Payton Moormeier.

Troy has a YouTube channel with name Zarbruh and has 27.6k subscribers on his channel. He has uploaded a video ‘We might be the dumbest people ever.