She is single at the moment.

Tsai is more focused on her career rather than being in a romantic relationship.

In further days, if he revealed anything about her career rather than being in romantic life. 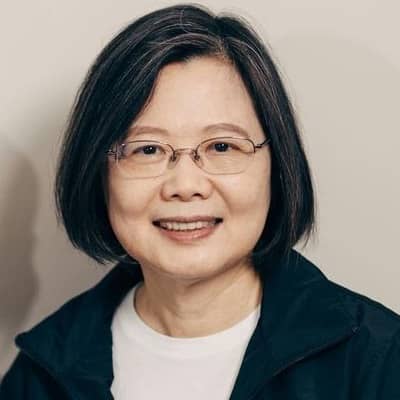 Who is Tsai Ing-wen?

Tsai Ing-wen is a Taiwanese political and educator. Currently, she is serving as the President of the Republic of China (Taiwan) since 2016.

She is of Chinese nationality and is of Hakka descent.

Tsai completed her high school in Taipei Municipal Zhongshan Girls High School. He then earned a law degree from the National Taiwan University in 1978.

In 1980, she obtained a Master of Laws at Cornell University Law School. Similarly, she then attended the London School of Economics and was awarded Ph.D. in law from the University of London in 1984.

Tsai made her first job as an educator in the School of Law at Soochow University and National Chengchi University in Taipei. In the early 1990s, she has ventured into government positions where she served as a key trade negotiator involved in Taiwan’s entry into the World Trade Organization under the then-ruling Kuomintang (KMT). In 2000, Tasi was appointed as Minister of the Mainland Affairs Council when Democratic Progressive Party (DPP) came into power.

She then joined Democratic Progressive Party (DPP) in 2004 and was eventually nominated by the DPP to be a candidate in the 2004 legislative election. Tsai was selected for the post of vice president of the Executive Yuan in 2006. She also served as chairwoman of the Consumer Protection Commission at that time. In 2007, she resigned from the post along with the rest of the cabinet when Premier Su Tseng-chang left his post. The following year, she defeated Koo Kwang-ming in the election for DPP chairperson.

In 2016, she became the first female leader of Taiwan when she was elected with 56% of the vote, beating her opponent Eric Chu by a margin of 25.04%. Since then, she has broken protocol by making overtures to the U.S., creating tensions with mainland China. In the 2020 reelection, Tsai again won with more than 57% of the popular vote.

In September 2021, Tasi was accused of having fake academic qualifications and forged her doctoral dissertation and her academic credentials from the London School of Economics and Political Science (LSE).

As a response, she has filed a civil defamation lawsuit against the two scholars who have repeatedly questioned without providing evidence.

Tsai hasn’t shared much about her wealth in the media. However, she might have amassed a decent amount of net worth, salary, and real estate till now.

Talking about Tsai’s physical appearance, she has a fair complexion. She stands at the height of 5 feet 4 inches tall. Likewise, her a black pair of eyes and as well black hair color.

Further, she has a self-titled YouTube channel with nearly 400k subscribers.