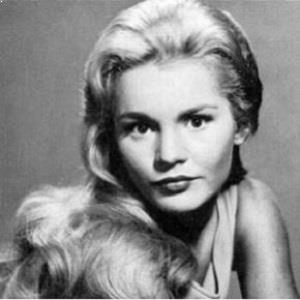 He walked into a room and everything stopped. Elvis was just so physically beautiful that even if he didn't have any talent... just his face, just his presence. And he was funny, charming, and complicated, but he didn't wear it on his sleeve. You didn't see that he was complicated. You saw great needs.

It seems the brighter you are, the deeper the hole you get into.

I do not ever want to be a huge star.

Tuesday Weld is single but has been married three times. She was married to screenwriter Claude Harz, from 1965 until their divorce in 1971. The couple had a daughter, Natasha, in 1966.

She later married British actor, musician, and comedian Dudley Moore in 1975. They had a son in 1976, Patrick, an actor, director and editor, but they later divorced in 1980. Five years later, she married Israeli concert violinist and conductor Pinchas Zukerman; they too divorced in 1998.

In 1962, she was romantically involved with Egyptian Actor Omar Sharif and American Singer Elvis Presley. She also dated Tom Mankiewicz from 1964 to 1964. From 1971 to 1972, she dated Canadian Comic David Steinberg. She also had a relationship with American Actor Al Pacino during 1972.

Who is Tuesday Weld?

Tuesday Weld is an American actress. Eventually, she garnered an Academy Award nomination for Best Actress in a Supporting Role for ‘Looking for Mr. Goodbar’.

Tuesday is of (English, with distant Dutch, Welsh, French, and Scottish) ethnicity.

She changed her name legally to ‘Tuesday Weld’ on October 9, 1959. Moreover, she got involved in the show business from an early age.

Her childhood was quite rough as she had a nervous breakdown at age 9. Later, she attempted suicide at the age of 12.

Tuesday has not revealed her educational background to the public.

Initially, her mother put Tuesday to work as a model. Tuesday Weld’s first acting debut was on television at the age of 12. Later on, she appeared in 1956 in Alfred Hitchcock crime drama ‘The Wrong Man’. Afterward, she played the lead role in ‘Rock, Rock, Rock’. Later, she played the role of Dorothy in ‘The Five Pennies’. She became part of the CBS television series ‘The Many Loves of Dobie Gillis’ as Thalia Menninger.

Tuesday appeared in several iconic movies and television series in her career. Some of them are The Cincinnati Kid, Lord Love a Duck, A Safe Place, Who’ll Stop the Rain and others. She gained attention in her thirties after she portrayed the role of Katherine in ‘Looking for Mr. Goodbar’.

Later, she appeared in ‘Once Upon a Time in America’. Tuesday was the inspiration behind Swan Dive’s song “Groovy Tuesday”.

This actress’s estimated net worth was $5 million. Her movie Chelsea Walls (2001) had collected an amount of about $60k.

There were rumors that Tuesday was romantically involved with Frank Sinatra during 1959 and Raymond Burr. Also, she lived controversial teenage years filled with depression and alcoholism.

Additionally, her body measurement is 36-23-35. Her bra size is 36C. She has Platinum blonde hair and green eyes.

Tuesday is not quite active on social media. She doesn’t have a Facebook page. In addition, she is not active over Twitter and Instagram as well.