Skip to content
Married Biography
Married Biography / Entertainment / Turning point in the career of America Ferrera through Triathlon; Shares a note saying how it helped her in defining her Inner critics

Turning point in the career of America Ferrera through Triathlon; Shares a note saying how it helped her in defining her Inner critics 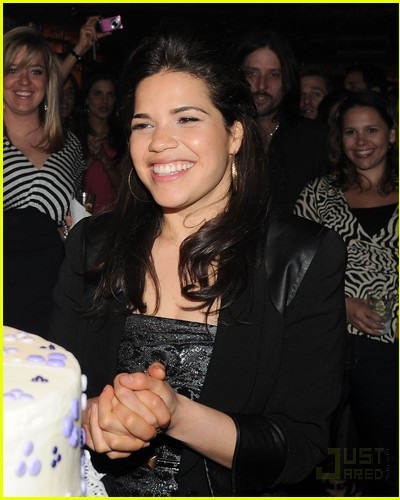 There is always a turning point in people’s life. There is a saying, people learn a lesson of his/her life from every step. The same things go with the American actress America Ferrera.

She says that how Triathlon changed her way of seeing her critics. She shared the note with all the people regarding her experience through a note.

America Ferrera’s note on the Triathlon

“It wasn’t a dream. I was standing onstage holding an Emmy. I’d imagined being in this room, clutching this statue ever since watching my first Emmy broadcast at 7 years old. Now, I was actually at the podium and accepting the award on national television. It was 2007, and I was 23. I had worked very hard to get this far, I was shooting 16-hour days to make “Ugly Betty,” and I was loving every minute of it.

This should have been a moment of sublime celebration. But it wasn’t. I can’t remember the words that came out of my mouth, but I do remember, clear as day, the words that ran through my mind: Who do you think you are? You don’t belong here. No one here thinks you deserve this. Hurry up and get off the stage.

It deeply saddened me that this mean, scared voice stole that moment of joy away. If I wasn’t going to own and enjoy my successes, then what was the point of working so hard? I decided to put up a fight by getting into therapy. For the next eight years, I worked really hard to recognize and silence that nagging internal critic. And at times, I even believed that she’d left for good.

Then a year ago, a friend of mine competed in her first triathlon to raise money for the Leukemia & Lymphoma Society. As I watched her train, I was equal parts enthralled and horrified. The running and biking seemed brutal enough, but the open-water swimming was unimaginable.

When my husband decided he was going to join her in the next triathlon, the voice returned with a vengeance: Don’t even think about it, America! You’re the fat kid. The procrastinator. The quitter. You have cellulite. YOU ARE NOT A TRIATHLETE!

“O.K., I’ll do it!” I yelled the words desperately. Sensing my own self-doubt, I doubled down, announcing my triathlon plan on every social media platform I have.

Every time my alarm went off at 6 a.m. on a Saturday, I deeply questioned the decision: What the hell was I thinking? Whenever I tried to run, an old shoulder injury would flare up. The pain was excruciating. I would trudge along trying to think of ways to get out of this commitment, could get sick. I could get called out of town for work. Maybe a car could hit me … lightly?

One day as I was miserably running laps, my coach Jerome said to me, “I don’t know what you’re saying to yourself when you reach that pole, but you need to change it.” I was annoyed and exhausted, but mostly I was creeped out. Was he psychic?! Every single time I passed that pole and looked up to the last 100 meters of my lap, the voice would start to scream: Who do you think you are? You can’t do this! Just stop and accept you’re a failure!

It occurred to me then that if I really wanted to make it through this challenge, I needed to rewrite my inner dialogue.

On my next run, I gave it a try. As I approached the last leg of my lap, and the sensation that I might throw up or pass out began to rise, I dug out my inner Beyoncé. I began to chant: I’m a survivor. I’m not gone give up. I’ma keep running, ’cause a winner don’t quit on herself!

I sounded like a crazy person, and it still hurt like hell. My shoulder, my lungs, my legs — my whole body ached. But for the first time, I didn’t feel beaten down at the end of a run. I felt like a badass.

Who the hell was I? And what else was I capable of that I had never dared to try?

Slowly, I stopped thinking about training as a physical challenge. It became mental. The true exercise was to keep the negative thoughts at bay for as long as I could.

How many strokes could I take before the fear needed a breath of air, could I run before my shoulder wanted to start telling her story again? How far up the hill could I pedal before I felt the urge to give up?

I began to have a real conversation with my mean, scared voice. I even began to understand her fear. She’d only wanted to save me from humiliation and failure. She was protecting me the best way she knew how, and I learned to appreciate that, even if I no longer required her services.

On the day of the race, I only had two goals: (1) finish and (2) stay positive. I am proud to say that I accomplished both.

I swam a mile in the ocean (not a shark in sight), biked 25 miles and then finally began to run the last 6.2 miles. The homestretch.

As I powered past people, more often than not, they would start walking. I’m going to be honest — the first few times, it felt good. But by the third or fourth time, it lost its novelty.

So I started to talk to each person I passed. I smiled as I hurled cringe-worthy enthusiasm their way. “GO, GIRL!” “You GOT this, man!” “We’re almost there!” My only goal was to yell louder than the voices in their heads. And you know what? People smiled back. Some started running again.

When I crossed the finish line, I didn’t cry, which shocked me, because I am a crier. It wasn’t until two days later, on a flight to New York, that the reality of what I had actually done hit me and the tears began to flow. I didn’t just complete a triathlon. For five months, I showed up to defend myself against a scared and angry voice. In the end, I didn’t eradicate her. But I had transformed her.

I finally got my answer to that question: Who do you think you are?

I am whoever I say I am. And I am a triathlete.

America Ferrera is married to Ryan Piers Williams on 27 July 2011. They started dating since they were studing in University of Southern California.

You may like to read America Ferrera gives birth to her second child with husband Ryan Piers Williams!

Heartfelt message of America Ferrera on her 33rd birthday

First and Foremost, everyone plans for the birthday celebration in a unique way with friends and loved ones. Some prefer to throw a birthday party while some prefer to keep it intimate with beloved ones.

Like any other people, no doubt  America Ferrera also plans her birthday to celebrate in a unique way. On the occasion of her 33rd birthday, she decided to collect all the wishes rather than making a wish. Read the full story

America Ferrera is an American actress. Ferrera is the recipient of numerous accolades including an Emmy Award, a Golden Globe Award, & a Screen Actors Guild Award among others.

Ferrera garnered wide recognition for Ugly Betty and her subsequent roles, She has been dubbed a “role model” for the young Hispanic women. Time magazine named her one of the 100 most influential people in the world in 2007. See more bio…

Katie Holmes: Blatant lies about her wedding, her response and the reason of her breakup from Tom cruise! Know it all here!
Tags : American Actress