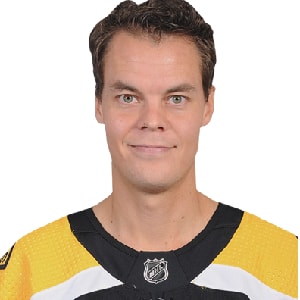 What is the relationship of Tuukka Rask?

Tuukka Rask is presently in a relationship with Jasmiina Nikkila. The pair have been together since high school. Additionally, they have a daughter together from this relationship named Vivien Rask (b.2014).

Who is Tuukka Rask?

Tuukka Rask is a Finnish professional ice hockey goaltender. Currently, he plays for the Boston Bruins of the National Hockey League. The Toronto Maple Leafs drafted him 21st overall in the 2005 NHL Entry Draft.

Rask was born in Savonlinna, Finland on March 10, 1987. He was born as Tuukka Mikael Rask to parents Jari and Irja Rask. His older brother Joonas Rask plays professionally as a forward with HIFK in the Finnish Liiga. Rask became interested in the world of hockey from an early age.

He is of Finnish nationality. Furthermore, there are no details available about his ethnic background at present.

Talking about his education, there are no details available relating to Rask’s educational background.

Rask initially played for the youth teams of his hometown club SaPKo in Savonlinna. Additionally, he played in 28 games for the Tampere-based Ilves Jr. in the junior league. In the 2005 NHL Entry Draft, he was the top-ranked European goaltender. Furthermore, the Toronto Maple Leafs drafted him in the first round, 21st overall, in the 2005 NHL Entry Draft. Later, he was traded to the Boston Bruins. Additionally, he signed a three-year contract with the Boston Bruins on 5 May 2007. In the 2009–10 season, Rask was the only goaltender in the NHL with a GAA of less than 2.00.

Rask won the Prince of Wales Trophy with Boston Bruins in 2011 and 2013. Additionally, in 2013, he was named the Finnish ice hockey player of the year.

Is Tuukka Rask involved in any rumors and controversies?

Rask became part of controversies due to his performance during October 2018. In addition, people suggested that a goalie controversy was on the way for the team. At present, there are no rumors concerning his life and career.

Talking about his body measurement, Tuukka Rask has a height 1.9m. Additionally, he weighs around 80 kg. Furthermore, his hair color is dark brown and his eye color is hazel.