Updated On November 7, 2022 | Published By: Brandy Stratton | In Child , Married
Share this 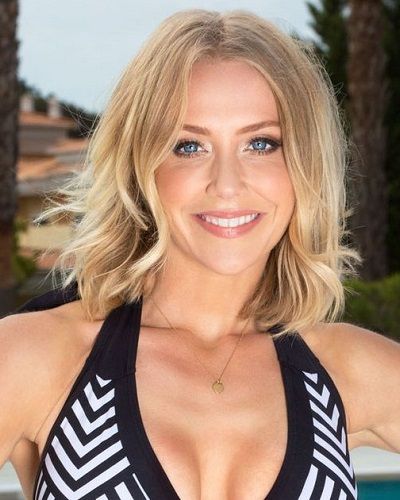 Wearing a bikini she posed in front of a bright pink wall. At present, she is channeling Cuban vibes. She took time off her job and is spending a holiday with her family. On her vacation post, she looked amazing with her wet blonde hair.

She was wearing her sunglasses and she was sitting on a pastel chair. Her sitting position highlighted her ample cleavage in the plunging halterneck.

Similarly, her swimsuit was in a pink and blue, floral print which she wore with a delicate necklace and a silver watch.

Likewise, she captioned the photo,

“Meet me by the pink wall… face in the sun @aplaceinthesunofficial.”

Also read TV presenter Nicki Chapman praised for telling her story of a brain tumor and its surgery!

The English presenter Laura Hamilton is known for being the presenter of “A Place in the Sun”. Recently in an interview, she revealed her health condition.

Similarly, she is a firm fixture on the Channel 4 show A Place In the Sun, where the property expert spends a lot of time showing British holidaymakers potential overseas homes.

Likewise, she has now spoken out about her recent health battle which she admitted has since “eased up” following the birth of her two children – Rocco and Thalia. Moreover, she revealed that she has always suffered from Irritable Bowel Syndrome (IBS).

“I’ve always suffered from IBS. It’s awful. After having children it’s definitely eased up. I don’t know if that’s because I’ve changed my diet a bit and I don’t eat bread.”

Who is the husband of Laura Hamilton?

English Tv presenter Laura Hamilton is a married woman. She is married to Alex Goward with whom she lives in Surrey. They walked down the aisle on 22nd September 2012. On 13th November she gave birth to a baby boy named Rocco.

Again on 8th May 2015, she gave birth to a daughter named Tahlia. They dated for a while before getting married. Her husband surprised her with the proposal which she accepted. Talking about the proposal, she said,

“Alex handed me a magnificent bouquest of lilies and roses,”

“He said, ‘I’ve got something else to give you,’ and pulled open a velvet box from his blazer pocket and flipped it open.”

Laura said that she was surprised,

“I just screamed ‘Oh my God! Oh my God! Alex was saying, ‘Are you going to answer me? And I said, ‘Yes! Yes! Yes,’ and literally jumped into his arms.”

They seem like a happy couple. Till now there is no news of their divorce. Also, there is no extra-marital affair between this beautiful couple. They are seen spending time together.

The American plus-sized model Ashley Graham posted a nude photo on Instagram! Know about her pregnancy and marriage
Tags : A Place in the Sun english presenter TV Presenter