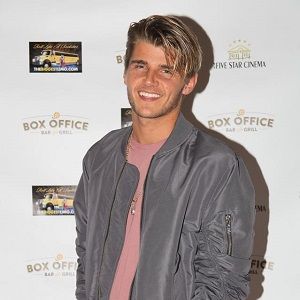 The 22-year-old Dutch model, Twan is an unmarried man. However, he has dated a couple of beautiful ladies in his life. Previously, he was in a relationship with Hannah Stocking. They began dating in 2016 but they couldn’t continue their relationship for so long and broke up just after one year in 2017.

Soon after that, she began going out with London Goheen. The lovebirds have been dating together since 2017 and are still together. Apart from her, he has never been involved in any affairs. Additionally, he has never been spotted with any woman apart from London. Currently, Twan and London are enjoying their love life and living elegantly.

Who is Twan Kuyper?

Twan Kuyper is a Dutch model and YouTuber who has earned over 1 million subscribers on his YouTube channel. Furthermore, he is also an Instagram star with more than 6.5 million followers.

Currently, he has been posting various comedy and challenges videos on his YouTube channel. Previously, he has more than 2 million fans following on his Vine account.

Twan Kuyper was born on February 19, 1996, in the Netherlands. His current age is 23. Talking about his nationality, he is Dutch and his ethnicity is unknown. He grew up in the Netherlands along with his four siblings.

From the beginning of his childhood, he had a keen interest in social media as well as in modeling. Moving towards his education, there is not any information regarding his educational background.

Furthermore, he also works for the Miami division of Next Models. Apart from modeling, he is also an Instagram star with more than 4.5 million followers.

He has a dream of working with Kevin Hart one day. Kevin is his favorite comedian.

Kuyper has an estimated net worth of around $2 million.

There are rumors that Twan is dating Lele Pons.

Twan has a height of 6 ft 2 inches and his weight is unknown. Moreover, he has a pair of attractive blue eyes and blonde hair. Besides this, there is not any information regarding his other body measurements.