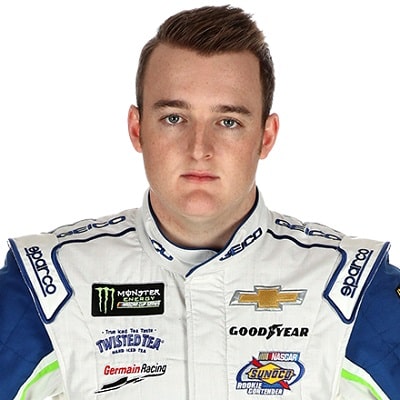 Ty Dillon is a married person. He has been married to his longtime girlfriend Haley Carey on December 20, 2014. He announced his engagement on December 28, 2013.  His wife is a former driver and a Charlotte Hornets cheerleader. The couple tied their knot in Vineyards, Lexington, North Carolina.

The couple welcomed their daughter Oakley Ray Dillon on November 20, 2017. The family is currently living together without any sign of divorce.

Who is Ty Dillon?

Ty Dillon is an American stock car racing driver currently competes full-time in the Monster Energy NASCAR Cup Series. He is the younger brother of Austin Dillon, also a NASCAR driver and their father is Mike Dillon, former driver, and RCR general manager.

He was on February 27, 1992, in Lewisville, North Carolina, USA. Dillon was born to mother Tina Dillon and father Mike Dillon, a former driver, and RCR general manager. He has a sibling, an older brother named Austin Dillon. His grandfather is Richard Childress, a former NASCAR driver, and RCR owner.

Dillon holds American citizenship but his ethnicity is unknown.

He began his professional racer with go-karts and Bandolero minicars. Later, he elevated to K&N Pro Series East in 2009 and 2010.

He won the Kansas Speedway,  Rockingham Speedway in 2010 and competed in his first full season in the series in 2011, which he won against Chris Buescher. But Buescher won the series rookie-of-the-year award.

He debuted Sprint Cup Series on July 15, 2014, in the no.33 Hillman-Circle Sports LLC in partnership with RCR at Atlanta Motor Speedway. Later, he returned to the No. 33 for the Quicken Loans Race for Heroes 500 at Phoenix International Raceway.

Also, he was named as the Most Interesting Sportsman in the World for the Spring of 2017 by Fin & Field on May 26, 2017. Also, he writes weekly vlogs in a series called ‘The Ride’ in which he includes his personal and racing life.

He has an estimated net worth of around $25 million and he has earned that sum of money from his car racing career. Most mid-tier drivers earn between $200,000 and $500,000, including a base salary in addition to either some percentage of their prize money or a success bonus

Dillon has been successful in keeping himself far from rumors and controversies in his personal and professional life.

Ty Dillon has a height of 5 ft. 10 inches and weighs 84 kg. He has blue eyes and light brown hair. But his shoe size, dress size, etc. are unknown.