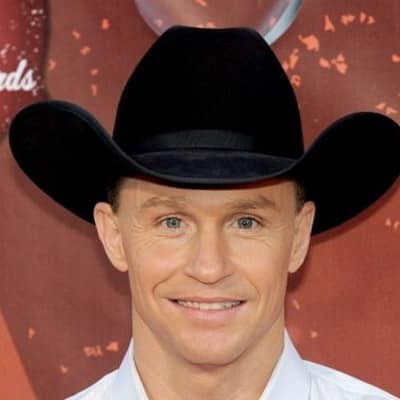 I have loved the cowboy life – everything about it – since the day I was born. There’s no other feeling on this Earth like making great rides on great animals.

I don’t care about going down in history as a great bull rider or bronc rider. I hope people will remember me as a great cowboy. I want to beat Larry Mahan's record.

What is the relationship of Ty Murray?

Ty is married to Paige Duke. The couple in December of 2014 while attending an after-party for 2014. At that time, Paige was an ERA reporter. In 2016, Ty took Paige on a long hike to Hope Lake, Colorado, and proposed to her at the top of the mountain.

After a year on September 30, 2017, Murray and Duke got married in North Carolina at The Quarry at Carrigan Farms in Mooresville. Later on September 24, 2018, they welcomed their first baby girl.

Previously, he was married to Jewel. His former wife was a singer with whom he got engaged in 2008 and finalized the divorce in 2014. The second wife is Paige Duke with whom he got married in 2017.

Murray had met Jewel in 1999 at the National Western Stock Show and Rodeo in Denver, Colorado. Her full name is Jewel Kilcher and she is the daughter of Atz Kilcher (an Alaskan all-around cowboy). She grew up riding horses and competing in local rodeos.

It is known that Ty and Jewel started their relationship by telephone for the starting nine months. Later, Jewel moved into Ty’s ranch in Stephenville, Texas.

The divorce was finalized at the age of 40 (Jewel) and 44 (Murray) whereas their son was going to be 3 years of age.

Who is Ty Murray?

Ty Murray is an American bull rider. He is better known as a nine-time World Champion professional rodeo cowboy.  He is one of the co-founders and a board adviser of Professional Bull Riders.

Ty has been inducted into the Pro Rodeo Hall of Fame in Colorado Springs under the all-around category. He is also the Tv Host by profession.

Ty Murray was born on 11 January 1969, in Phoenix which is situated in Arizona, USA. As of 20121, he is 51 years of age. His birth name is Ty Monroe Murray and his zodiac sign is Libra. He holds American nationality and belongs to the Caucasian ethnicity.

Ty is the son of the rodeo hand Butch Murray and bull rider Joy Murray. He has two sisters named Kim Murray and Kerri Murray. He was raised by his parents on a farm since he was a kid.

Regarding academics, he first went to the Deep valley High School and later joined the gymnastic crew at a very young age. In high school, he was the All-Around Champion Cowboy, and also in 1987, he helped Arizona to win the first National High School Rodeo Association Championship.

He has also attained Odessa College and graduated in school rodeo events.  At the age of 18, he joined the Professional Rodeo Cowboys Association and also became the youngest PRCA ALL-Around Rodeo Cowboy.

After a year again he has completed the PRCA circuit. It is known that he and his uncle Mr. Butch Myers were the only two cowboys who were qualified in one or more events.

He became the youngest millionaire in rodeo history at the age of 23. He had also won the PBR Bud Light Cup World Championship event in Las Vegas in 1919. He has earned $265,000 and also became the most ever won at the PBR event.  Murray has been awarded the 9 times World Champion and is known as the king of the Cowboys.

In 2007, Murry and Jewel appeared on the ABC reality television series Fast Cars and Superstars: The Gillette Young Guns Celebrity Race. He matched up against skateboarder Tony Hawk and actress Krista Allen in the first round of the competition.

It was announced that for the first time Husband and wife will be a contestant on the eighth season of Dancing with Stars. But Jewel had to withdraw from the competition cause she had an injury during pre-season practice.

Later, Ty was partnered with the professional dancer Chelsie Hightower. However, he was eliminated in the tenth-week semifinals.

In 2009, Murray and Jewel also appeared on the HGTV Celebrity Holiday Homes special. Also, after a year they both appeared on the ABC reality series Extreme Makeover: Home Edition.

What is the net worth of Ty Murray?

At the age of 51, his net worth is growing significantly. As of now (2021), his estimated net worth is $7 Million. There is not much information about his exact salary.

As observing body statistics, this cowboy stands at the height of 5 feet and 8 inches or 173 cm and weighs 73 kg or 161 Ibs. His hair color is grey.

Ty has blue pairs of eyes with a small face. The information about his full body measurements, shoe size, and dress are not available.

This cowboy is also available on different social media platforms. He is active on Facebook, Instagram, and Twitter where he has earned more than 26.1k followers.