Tye Sheridan is an actor best known for his role as Cyclops in the X-Men: Apocalypse. 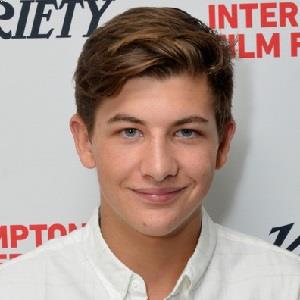 When I was shooting 'Mud,' every day was my favourite! I had so much fun on this film and loved working with all the cast and crew! It was a great experience

There's not anyone in particular I'd like to work with. I just want to continue doing work that I have a passion for.

Who is Tye Sheridan?

Tye Sheridan is a young American actor best known for his role as Cyclops in the 2016 blockbuster X-Men: Apocalypse. He is also widely known for his role as Gary Jones in Joe (2013). He has been named one of Variety’s 10 Actors to Watch and he is one of the best young talents in the industry.

Tye Sheridan was born on 11 November 1996, in Elkhart, Texas, United States. He is of American nationality and is of mixed (English, Scottish, Swiss-French) ethnicity.

His name by birth is Tye Kayle Sheridan. He is the elder child of Bryan Sheridan, an employee of UPS, and Stephanie Sheridan. His mother owns a beauty salon. He has a younger sister named Madison Sheridan.

He was educated at Elkhart Independent School District. He had almost no acting experience when he was cast for his first movie.

Tye began his acting career in 2011. He was cast in a breakthrough role for the movie The Tree of Life (2011) opposite Brad Pitt, Sean Penn and Jessica Chastain in 2011. His first movie won the 2011 Palme d’Or at the Cannes Film Festival and the 2011 Gotham Award for Best Picture Award that year.

Tye was featured in Top 25 Actors of 2011. After a year, he appeared as Ellis in Mud (2012).  His performance was highly appreciated by the audience and filmmakers which earned him more roles in bigger movies. In 2013, he won the Best New Young Actor award in ‘Marcello Mastroianni Award ceremony for his role as Gary Jones in Joe (2013). He also won the ‘Phoenix Film Critics Society Award’ for his performance in Mud and he was also nominated for the Critics’ Choice Movie Award- Best Young Actor for the same movie.

He played Scott Summers / Cyclops in the 2016 blockbuster film X-Men: Apocalypse for which he earned huge popularity and appreciation. Recently, he completed a movie titled Grass Stains in 2017, in which he played Conrad Stevens. His one movie, Ready Player One is under post-production.

Tye Sheridan: Salary and Net Worth

Tye was rumored to have hooked up with the beautiful British actress, Sophie Turner in 2015 but none of them confirmed the rumor. There is no rumor of him dating anyone at the present time.

Tye has a height of 5 feet 8 inches. His body weighs 71kg. He has light brown hair and blue eyes.