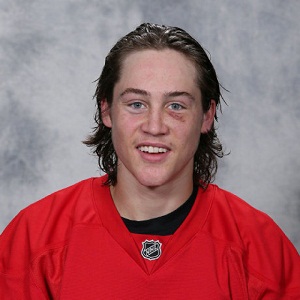 We just weren’t good defensively, we needed to be better on the power play, and I thought we did a good job of that. I thought our PK wasn't too bad either. Just 5-on-5, we just needed to bear down a little bit more.

What is the relationship of Tyler Bertuzzi?

Tyler Bertuzzi is in a relationship. He is having an affair with Ashley Greasley. The couple is deeply in love with each other and keeps uploading pictures of them on their social media handle.

His girlfriend is pregnant and expecting their first baby.

Other than this there is no information on their relationship.

Who is Tyler Bertuzzi?

Tyler Bertuzzi is a Canadian ice hockey player. He currently is playing for the Detroit Red Wings of the National Hockey League (NHL).

Bertuzzi was drafted 58th overall by the Detroit Red Wings in the 2013 NHL Entry Draft.

When did Tyler Bertuzzi born?

Bertuzzi was born Tyler Bertuzzi on February 24, 1995, in Sudbury, Ontario, Canada. His nationality is Canadian and his ethnicity is North American.

His parents are Angela Bertuzzi, the mother, and Adrian Gedye, the father. He has a brother named Evan Gedye and is the nephew of former NHL player Todd Bertuzzi.

There is no information on educational background.

Bertuzzi was drafted 78th overall in the 2011 OHL Entry Draft by the Guelph Storm. During the 2011–12 season, he played 61 games for Guelph in his first full year in the OHL.

Making his OHL debut on September 22, 2011, he recorded a fight. Tyler finished with 6 goals, 11 assists, and 117 penalty minutes. He played in all 6 of Guelph’s playoff games, finishing the series with two assists.

During the 2012–13 season, he had 13 goals and 9 assists in 43 games. He played in all 5 playoff games with Guelph, finishing with no points and 14 penalty minutes.

During the 2013–14 season, he only played in 29 games, finishing the season with 10 goals and 25 assists, helping the Storm capture the OHL Championship and advance to the Memorial Cup championship game.

Bertuzzi led the Memorial Cup with 5 goals in 4 games. Guelph played 18 playoff games, with Bertuzzi playing in all, scoring 10 goals and 7 assists.

Bertuzzi had the best season of his career during the 2014-15 season, leading Guelph Storm in scoring 98 points while playing in all of the team’s 68 games. Bertuzzi also led Guelph in goals (43), assists (55), and penalty minutes (91).

Through 9 games in the playoffs, he tied the team in scoring with 8 points. Bertuzzi was named an OHL all-star, finishing the season ranked tenth in OHL scoring.

On October 17, 2014, the Detroit Red Wings signed Bertuzzi to a 3-year entry-level contract.

After finishing his season with Guelph Storm, Bertuzzi played 2 regular-season games of the 2014–15 season. He made his professional debut for the Grand Rapids Griffins on April 16, 2015, in a game against the Lake Erie Monsters.

In his second AHL game, also against the Lake Erie Monsters, he scored his first professional goal against Calvin Pickard.

On November 7, 2016, he was recalled by the Detroit Red Wings and made his NHL debut the next day in a game against the Philadelphia Flyers. Before being recalled he recorded 2 goals and 2 assists in 9 games for the Griffins.

On November 15, he was assigned to Grand Rapids. Bertuzzi appeared in 3 games for the Red Wings, logging 5 hits and 2 shots on goal. He was once again recalled by the Red Wings on November 17.

How tall is Tyler Bertuzzi?

He has light brown hair color and his eye color is blue. There is no information about his shoe size.

Also get to know more about the birth facts, education, career, net worth, rumors, height, and social media of different personalities like Rob Niedermayer, Brad Richardson, and Mario Lemieux.