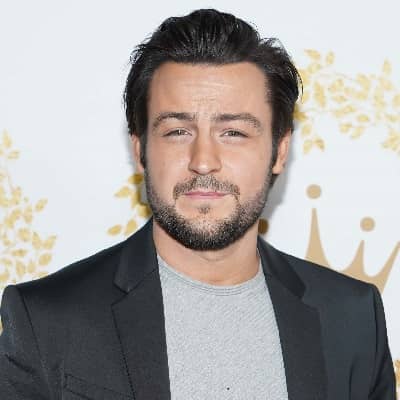 Tyler has always maintained lowkey when it comes to his love life. He hasn’t officially dated anyone now and is living his single life.

Before in around 2017, he has posted his dog and lady photo. Her name was Racquel Natasha. He mentioned her as her girl and she was speculated as Tyler’s girlfriend.

Moreover in 2018’s one of the interviews he shared that he has a girlfriend. He also mentioned that she has opened his Twitter account.

Who is Tyler Hynes?

Tyler Hynes is a Canadian actor, director, producer, writer, musician, and also a filmmaker. Moreover, he is also a rapper and is a member of a rap band called All Logic.

Tyler was born on May 6, 1986. Born in Toronto, Ontario, Canada, the actor holds Canadian nationality. Likely, he belongs to the Caucasian ethnicity. Tyler grew up with his brother Brandon Hynes.

His mother’s name is Betty Robichaud Hynes. And he hasn’t disclosed his father’s name. The actor has also posted his childhood photos with his parents on his Instagram account.

The actor began his acting career when he was just 7 yrs old. he played Demi Brooke in Little Men. He was then cast as Gary Epps in the TV Series, The Mystery Files of Shelby Woo and in the movie, Home Team.

Furthermore, Tyler has expanded his career into directing, writing, and producing. He has worked for short films like Help Doug Recycle. It is a 40 minute documentary about substance abuse and poverty. As well as he has directed Firefly and AFK.

Similarly, he has directed music videos of successful artists like Shaun Frank and Rezz. The actor is also a rapper. He is also one of the members of a rap band, All Logic.

Just in 2021, he appeared in shows like It Was Always You and Sweet Carolina.

Likely he has been a long time he is active in the entertainment industry and is paid more than $56,000, which is the average salary of an American actor.

The star has been able to influence the people in a positive way and hasn’t appeared in any kind of controversial news.

Apart from it, the actor was rumored to be dating his co-star, Erin Krakow. They have appeared together in Hallmark’s, It Was Always You.

Tyler stands with a height of 5 feet and 9 inches and weighs around 60 kg. With beautiful green eyes, the actor has black-colored hair.

You may also read the bio of Max Walker, Cristina Rosato, Suki Kaiser, and Mia Kirshner.